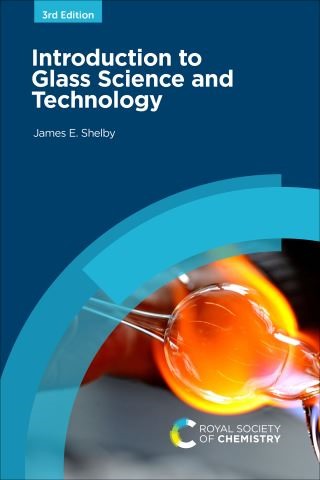 Introduction to Glass Science and Technology

Presenting the fundamental topics in glass science and technology, this concise introduction includes glass formation, crystallization, and phase separation. Glass structure models, with emphasis on the oxygen balance method, are presented in detail. Several chapters discuss the viscosity, density, thermal expansion, and mechanical properties of glasses as well as their optical and magnetic behavior and the diffusion of ions, atoms, and molecules and their effect on electrical conductivity, chemical durability, and other related behavior. In addition to the effects of atomic structure on the properties of glasses, the effects of phase separation, crystallization, and water content, which are neglected in most texts, are discussed extensively. Glass technology is addressed in chapters dealing with the raw materials for producing glasses, batch calculations, and the melting and fining processes. The compositions, properties, and production of commercial glasses are also presented. A chapter is devoted to the use of thermal analysis in the study of glasses, including their crystallization behavior. This expanded, third edition, includes new chapters on doped vitreous silica and the, often overlooked, role of halides on glass formation and properties. In addition, solutions to all of the exercises at the ends of chapters are included for the first time in this edition.
This introductory text is ideal for undergraduates in materials science, ceramics, or inorganic chemistry. It will also be useful to the graduate student, engineer, or scientist seeking basic knowledge of the formation, properties, and production of glass in support of their work.

James E Shelby: Dr. Shelby obtained his B.S. (1965), M.S. (1966), and Ph.D. (1968) degrees from the University of Missouri School of Mines and Metallurgy (now known at the Missouri Science and Technology University) in Rolla, MO. He was a Member of Technical Staff at Sandia National Laboratory in Livermore, CA from 1968 to 1982. He joined the faculty of the New York State College of Ceramics at Alfred University in 1982 as an Associate Professor of Glass Science. He was promoted to Professor in 1985 and named the John F. McMahon Professor of Ceramic Engineering in 1998. He retired in 2010 as an Emeritus Professor.
Dr. Shelby was presented with the George W. Morey Award in 1975 by the American Ceramic Society for his original research on gas diffusion in glasses. He was selected by his peers to chair the Gordon Conference on Glass in 1985. He was named a Fellow of the American Ceramic Society in 1986.
Dr. Shelby is the author of two books: Introduction to Glass Science and Technology, which is widely used as a text, and Handbook of Gas Diffusion in Solids and Melts, which is the primary reference for gas diffusion and permeability data in materials. He is also the editor and primary author of “Rare Elements in Glasses” and approximately 300 journal and proceeding articles and book chapters. His primary research has been in gas and water diffusion and solubility in glasses and melts, properties, phase separation and crystallization of glasses, radiation effects, colloid formation in glasses, and the development of new and unusual glass compositions.