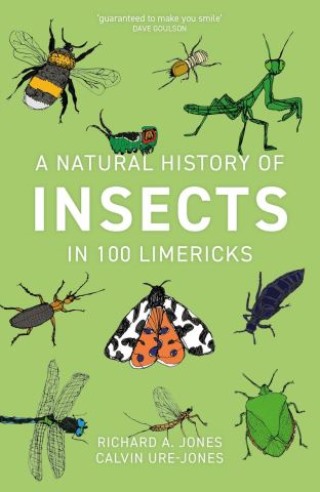 A Natural History of Insects in 100 Limericks

Insects are often overlooked because they are small or ignored because they are deemed trivial, and many are dismissed as nuisance pests. But their numbers and diversity are mind-numbing, and under even a modest hand lens they are beautiful or bizarre.

Insects dominate the centre ground of all terrestrial and most aquatic ecosystems. They inform us of the conservation value of ancient woodland and chalk downland. They help monitor the purity or pollution levels of ponds, streams and rivers. And they can demonstrate the effects of climate change, acting as warning lights to alert us to the damage that humans are doing to the world. Recent insectageddon headlines are starting to make people sit up and take more notice.

What better way to promote an interest in these fascinating creatures than by poetizing them? This cornucopia of discordant nonsense, with some quite frankly dubious rhyming clashes, is offered up so that entomological outreach will at least benefit from their shock value.

Richard writes about insects, nature and the environment for BBC Wildlife, the Guardian, Gardener’s World and Countryfile and has regular radio appearances on such programmes as Home Planet and Woman’s Hour.

Richard is author of several books on science and wildlife including Nano Nature (HarperCollins, 2008), Beekeeper’s Bible (to which he is a major contributor, HarperCollins 2010). Extreme Insects (HarperCollins) was published in September 2010 and received widespread recognition in the press. The paperback was issued in September 2011. The Little Book of Nits (Bloomsbury) was published in May 2012. Mosquito, in the acclaimed Animal series (Reaktion Books) appeared in August 2012. House guests, house pests - a natural history of animals in the home was published in February 2015 (Bloomsbury). It was released in paperback in February 2016. He is currently working on the Beetles volume of HarperCollins' famous New Naturalist series.