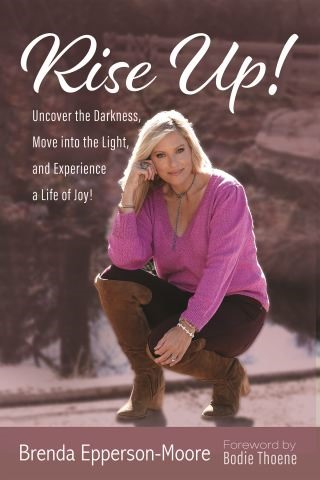 Uncover the Darkness, Move into the Light, and Experience a Life of Joy!

Rise Up! is a book about joy, a deep inner joy one can never achieve without God's grace and mercy. By the time you've reached the end of this book, you will be able to identify what's holding you back, and move forward to reach solutions in your life. You will build your faith, breaking chains, and the negative ideas you have about yourself will no longer have a stronghold over your life. Those thoughts and lies will be replaced with the powerful truth of who you are and joy will begin to rise up inside of you. You will receive practical tools and biblical principles that will ignite a new flame of hope in your life.

Brenda Epperson-Moore: Brenda Epperson-Moore is an actress, singer, host, and writer who achieved early fame as
Ashley Abbott, the lead character in CBS' The Young & The Restless. Born in North Hollywood, California, she is the daughter of famed musician and actor, Don Epperson, who suffered an untimely death when Brenda was six years old. She is a Sony Tri/Star recording artist and was the opening act for Lionel Richie during his World Time tour. Brenda won the "Angel Award" for the song "If You Believe," a duet she recorded with Phillip Ingram. She was a television host and co-hosted a beauty show with Dr. Andrew Ordon from the television show The Doctors. She has also appeared on many popular shows including, Howie Mandel and Oprah. With an extensive movie career, Brenda has traveled the world working with 'A' list actors. Brenda has graced the covers of Woman's World Magazine, Soap Opera Digest, had extensive stories in
People Magazine, U.S.A. Today, and countless other publications. In 2012, God tapped Brenda on the shoulder and told her to start a non-profit women's conference, she is the founding Co-Director of an uplifting, faith-based movement for women: AscendWomen.org Brenda takes her passion, talents, and her entertainment industry connections to outreach programs and organizations that touch the lives of the broken, battered, and abused. She is the contributing author to the book Blessedness of Brokenness (2012).

Brenda is currently in her fifth year on the BET plus show, The Rich and the Ruthless, playing the character Edith Norman. Co-hosting her podcast "Morning Cup of Faith" has proven to become a success as her audience is growing.

Brenda is a sought-after speaker and sings nationwide using her international platform to encourage, empower, ignite and remind us all that joy and the indomitable power of God is attainable for all of us. She is married to the love of her life and is raising three beautiful daughters.