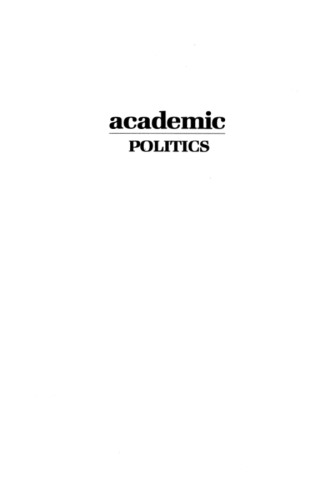 If you want to understand the inner workings of academia, this remarkably insightful book is the one to read.   Steven M. Cahn City University of New York Graduate Center

William R. Brown: William R. Brown is a retired Foreign Service Officer who served twenty years in the Middle East and Asia. He was in both the Department of State and the Agency for International Development with assignments in Egypt, Yemen, Sudan, Lebanon, Indonesia and Pakistan. In addition to Academic Politics, he is the author of The Last Crusade, a Negotiator's Middle East Handbook and articles in Foreign Policy, Middle East Journal and the Christian Science Monitor. He was Dean of Arts and Sciences and Professor of Political Science at Central Connecticut State University. He holds a PhD from Harvard and also attended the University of Cincinnati, SAIS Johns Hopkins, Washington University St Louis and American University of Beirut.