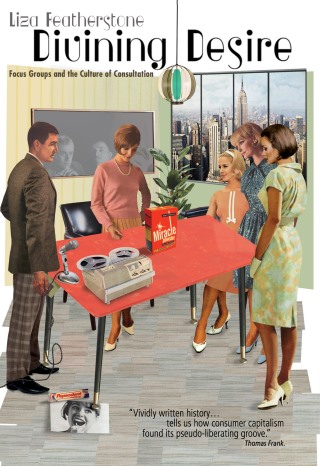 Focus Groups and the Culture of Consultation

Over the course of the last century, the focus group has become an increasingly vital part of the way companies and politicians sell their products and policies. Few areas of life, from salad dressing to health care legislation to our favorite TV shows, have been left untouched by the questions put to controlled groups about what they do and don’t like. Divining Desire is the first-ever popular survey of this rich topic.

In a lively, sweeping history, Liza Featherstone traces the surprising roots of the focus group in early-twentieth century European socialism, its subsequent use by the “Mad Men” of Madison Avenue, and its widespread deployment today. She also explores such famous “failures” of the method as the doomed launch of the Ford Edsel with its vagina shaped radiator grille, and the even more ill-fated attempt to introduce a new flavor of Coca Cola (which prompted street protests from devotees of the old formula).

As elites have become increasingly detached from the general public, they rely ever more on focus groups, whether to win votes or to sell products. And, in a society where many feel increasingly powerless, the focus group has at least offered the illusion that ordinary people will be listened to and that their opinions count. Yet, it seems the more we are consulted, the less power we have. That paradox is particularly stark today, when everyone can post an opinion on social media—our 24 hour “focus group”—yet only plutocrats can shape policy.

In telling this fascinating story, Featherstone raises profound questions about democracy, desire and the innermost workings of consumer society.

Liza Featherstone: Liza Featherstone is a journalist based in New York City and a contributing editor to The Nation, where she also writes the advice column “Asking for a Friend.” Her work has appeared in the New York Times, Ms., and Rolling Stone among many other outlets. She is the co-author of Students against Sweatshops: The Making of a Movement (Verso, 2002) and author of Selling Women Short: The Landmark Battle for Workers’ Rights at Wal-Mart (Basic, 2004). She is the editor of False Choices: The Faux Feminism of Hillary Clinton (Verso, 2016).