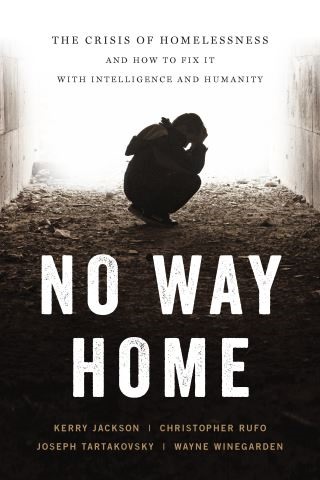 In San Diego, not far from the gates of the fantasy world of Disneyland, tent cities lining the freeways remind us of an ugly reality. Homeless individuals are slowing rail traffic between Sacramento and the Bay Area and swarming subway trains in Los Angeles in search of a place to sleep when they’re not languishing on Skid Row. Drug use among the homeless is plaguing communities, with discarded needles threatening children playing at public parks. And every day across California, thousands of homeless youth who lack safe and stable housing struggle to stay in school, to perform well academically, and to form meaningful connections with their teachers and peers.

Since the 1980s, countless research studies have been published on the topic of homelessness in America. Too often, however, social science research on homelessness is narrow in scope, mired in politics, and reliant on questionable assumptions about the root causes of the problem. The severity of the homeless crises afflicting cities requires innovative solutions backed by credible data and objective research.

Wayne Winegarden, Ph.D., is a Sr. Fellow in Business & Economics, Pacific Research Institute, as well as the Director of PRI’s Center for Medical Economics and Innovation. Dr. Winegarden’s columns have been published in the Wall Street Journal, Chicago Tribune, Investor’s Business Daily, Forbes.com, and USA Today. He was previously on the economics faculty at Marymount University, has testified before the U.S. Congress, has been interviewed and quoted in such media as CNN and Bloomberg Radio, and is asked to present his research findings at policy conferences and meetings. Dr. Winegarden is also the Principal of an economic advisory firm that advises clients on the economic, business, and investment implications from changes in broader macroeconomic trends and government policies. Clients have included Fortune 500 companies, financial organizations, small businesses, and trade associations. Previously, Dr. Winegarden worked as a business economist in Hong Kong and New York City; and a policy economist for policy and trade associations in Washington D.C. Dr. Winegarden received his B.A., M.A., and Ph.D. in Economics from George Mason University.

Joseph Tartakovsky is the former Deputy Solicitor General of Nevada, an attorney specializing in constitutional and appellate law in California, and the author of The Lives of the Constitution: Ten Exceptional Minds that Shaped America’s Supreme Law.  He is also a Pacific Research Institute Fellow in Legal Studies. His writing has appeared in the New York Times, Wall Street Journal, and Los Angeles Times, among other publications.

Kerry Jackson is an independent journalist and opinion writer with extensive experience covering politics and public policy. Currently a fellow with the Center for California Reform at the Pacific Research Institute (PRI), he writes weekly op-eds and blog posts on statewide issues, and occasional books and policy papers. Jackson is a leading commentator on California’s growing homeless crisis. In 2019, he co-authored with Dr. Wayne Winegarden a brief on San Francisco’s homeless crisis, which was presented to Mayor London Breed’s administration.