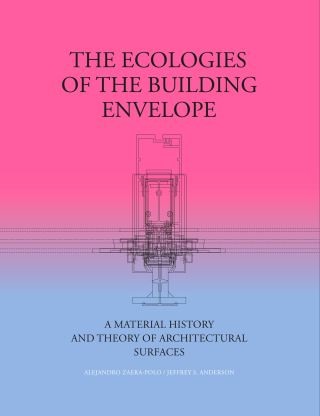 The Ecologies of the Building Envelope

A Material History and Theory of Architectural Surfaces

The Ecologies of the Envelope theorizes the building envelope as a literal embodiment of the social, political, technological, and economic contingencies which have become embedded within it over the last century, analyzing the historical lineages, heroes and villains that helped define the complex material ecologies we see within the envelope today.

While the façade is one of the most thoroughly theorized elements of architecture, it is also one of the most questioned since the end of the 19th century. Within the discipline of architecture, the traditional understanding of the façade focuses primarily on semiotic and compositional operations (such as proportional laws and linguistic codes), which are deployed on the building's surface. In contrast to this, our material and environmental theory of the envelope proposes that the exponential development of building technologies since the mid-19th century, coupled with new techniques of management and regulation, have diminished the compositional and ornamental capacities of the envelope in favor of material, quantitative, and technical performances. Rather than producing a stylistic analysis of the façade, we investigate the historical lineages of the performances, components, assembly types, and material entanglements that constitute the contemporary building envelope.

Alejandro Zaera-Polo: Alejandro Zaera Polo is an architect and an architectural theorist. He has an MARCH II with Distinction from the Graduate School of Design, Harvard University. He worked for the Office for Metropolitan Architecture in Rotterdam, before establishing Foreign Office Architects in 1993 in London. He started AZPML as a legacy practice of FOA after its dissolution in 2011. Besides his professional practice, Alejandro was the Dean of Princeton School of Architecture and of the Berlage Institute in Rotterdam. He has been Visiting Professor at Yale, Columbia, and UCLA and was a Unit Master at the Architectural Association in London. He has been a frequent contributor to professional publications such as El Croquis, Quaderns, A+U, Arch+, Log, AD, Harvard Design Magazine and Geographies.|||Jeffrey S. Anderson is a design technologist and architectural designer specializing in custom AR/VR experiences and interactive technologies. He currently teaches in the Graduate Architecture and Urban Design program at Pratt Institute and runs the Design Lab at Mancini Duffy in New York. He has worked with renowned architects, theorists, and designers including Alejandro Zaera-Polo, Diller Scofidio + Renfro, Jimenez Lai, Jeffrey Kipnis, and Cesar Pelli. His work has been exhibited at the Seoul Biennale of Architecture and Urbanism, the Gwangju Asia Culture Center, the Venice Architecture Biennale, Princeton University, SCI-Arc, the University of Michigan, and Ohio State University. He holds a Master of Architecture II from Princeton University, and both a Master of Architecture and a Bachelor of Science in Architecture from the Knowlton School of Architecture at Ohio State University.