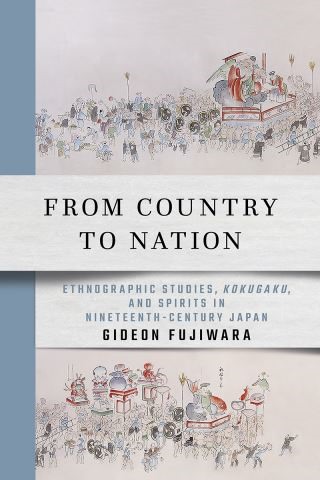 From Country to Nation

From Country to Nation tracks the emergence of the modern Japanese nation in the nineteenth century through the history of some of its local aspirants. It explores how kokugaku (Japan studies) scholars envisioned their place within Japan and the globe, while living in a castle town and domain far north of the political capital.

Gideon Fujiwara follows the story of Hirao Rosen and fellow scholars in the northeastern domain of Tsugaru. On discovering a newly "opened" Japan facing the dominant Western powers and a defeated Qing China, Rosen and other Tsugaru intellectuals embraced kokugaku to secure a place for their local "country" within the broader nation and to reorient their native Tsugaru within the spiritual landscape of an Imperial Japan protected by the gods.

Although Rosen and his fellows celebrated the rise of Imperial Japan, their resistance to the Western influence and modernity embraced by the Meiji state ultimately resulted in their own disorientation and estrangement. By analyzing their writings—treatises, travelogues, letters, poetry, liturgies, and diaries—alongside their artwork, Fujiwara reveals how this socially diverse group of scholars experienced the Meiji Restoration from the peripheries.

Using compelling firsthand accounts, Fujiwara tells the story of the rise of modern Japan, from the perspective of local intellectuals who envisioned their local "country" within a nation that emerged as an empire of the modern world.

Gideon Fujiwara is Associate Professor of History and Coordinator of Asian Studies at the University of Lethbridge.