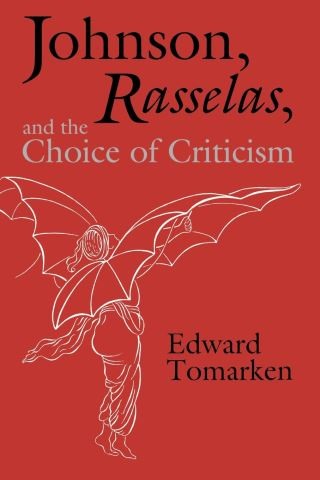 Johnson, Rasselas, and the Choice of Criticism

Although Rasselas has received more critical commentary than almost any other work by Samuel Johnson, Edward Tomarken's book is the first full length study to focus on his tale of the Prince of Abyssinia. This anomaly arises, as Tomarken shows, because Rasselas has remained resistant to the customary critical approaches of the eighteenth, nineteenth, and twentieth centuries, consistently eliciting new kinds of insights and raising new sorts of problems.

Tomarken' s contribution is a new methodology to explain this phenomenon. He sees Johnson's early writings, London and Irene, as instances of the writer trying with only partial success to achieve what he first realized in The Vanity of Human Wishes, a means of permitting literary form to refer to conduct. Later works, such as The Journey to the Western Islands of Scotland, are viewed as further developments of this method, which achieved its fullest expression in Rasselas and the Life of Pope.

Such a reading of Johnson develops an aesthetic that operates on the margins between the literary and the extra-literary. Although Johnson's own critical view was unable to accommodate such a position, Tomarken shows that in practice he moved toward it by a process of trial and error manifest in his poetry and narratives. When raised to the level of critical method, this approach goes beyond the assumptions not only of Johnson's day but also of our own.

Tomarken's theoretical coda demonstrates how the choices of current critical theory, like those in the marriage debate in Rasselas, can be understood to interact with one another. Specifically, he proposes a dialectical relationship for two approaches hermeneutics and structuralism-usually seen as opposed to one another. This innovative study will interest not only Johnson scholars but all those concerned with critical theory.