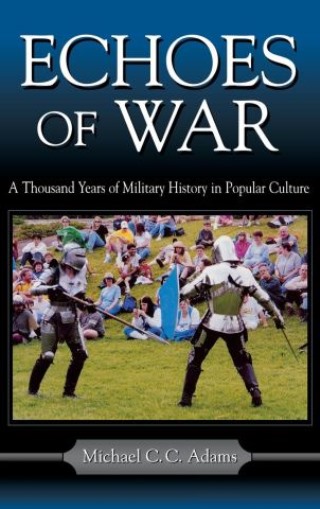 A Thousand Years of Military History in Popular Culture

Americans are often accused of not appreciating history, but this charge belies the real popular interest in the past. Historical reenactments draw thousands of spectators; popular histories fill the bestseller lists; PBS, A&E and The History Channel air a dizzying array of documentaries and historical dramas; and Hollywood war movies become blockbusters.

Though historians worry that these popular representations sacrifice authenticity for broad appeal, Michael C.C. Adams argues that living history—even if it is an incomplete depiction of the past—plays a vital role in stimulating the historical imagination. In Echoes of War, he examines how one of the most popular fields of history is portrayed, embraced, and shaped by mainstream culture.

Adams argues that symbols of war are of intrinsic military significance and help people to articulate ideas and values. We still return to the knight as a symbol of noble striving; the bowman appeals as a rebel against unjust privilege. Though Custer may not have been the Army's most accomplished fighter, he achieved the status of cultural icon. The public memory of the redcoated British regular soldier shaped American attitudes toward governments and gun laws. The 1863 attack on Fort Wagner by the black Fifty-fourth Massachusetts regiment was lost to public view until racial equality became important in the late twentieth century.

Echoes of War is a unique look at how a thousand years of military history are remembered in popular culture, through images ranging from the medieval knight to the horror of U.S. involvement in the My Lai massacre.