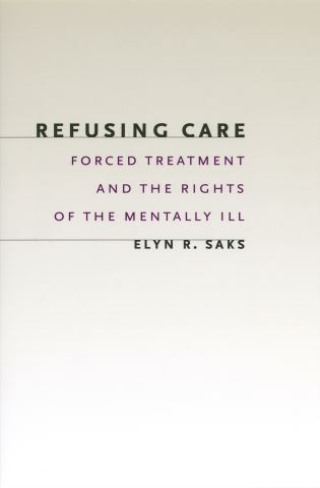 Forced Treatment and the Rights of the Mentally Ill

It has been said that how a society treats its least well-off members speaks volumes about its humanity. If so, our treatment of the mentally ill suggests that American society is inhumane: swinging between overintervention and utter neglect, we sometimes force extreme treatments on those who do not want them, and at other times discharge mentally ill patients who do want treatment without providing adequate resources for their care in the community.

Focusing on overinterventionist approaches, Refusing Care explores when, if ever, the mentally ill should be treated against their will. Basing her analysis on case and empirical studies, Elyn R. Saks explores dilemmas raised by forced treatment in three contexts—civil commitment (forced hospitalization for noncriminals), medication, and seclusion and restraints. Saks argues that the best way to solve each of these dilemmas is, paradoxically, to be both more protective of individual autonomy and more paternalistic than current law calls for. For instance, while Saks advocates relaxing the standards for first commitment after a psychotic episode, she also would prohibit extreme mechanical restraints (such as tying someone spread-eagled to a bed). Finally, because of the often extreme prejudice against the mentally ill in American society, Saks proposes standards that, as much as possible, should apply equally to non-mentally ill and mentally ill people alike.

Mental health professionals, lawyers, disability rights activists, and anyone who wants to learn more about the way the mentally ill are treated—and ought to be treated—in the United States should read Refusing Care.

Elyn R. Saks:
Elyn R. Saks is the Orrin B. Evans Professor of Law and Psychiatry and the Behavioral Sciences at the University of Southern California Law School and a research clinical associate at the Los Angeles Psychiatric Society and Institute. She is the author of Jekyll on Trial: Multiple Personality Disorder and Criminal Law and Interpreting Interpretation: The Limits of Hermeneutic Psychoanalysis.