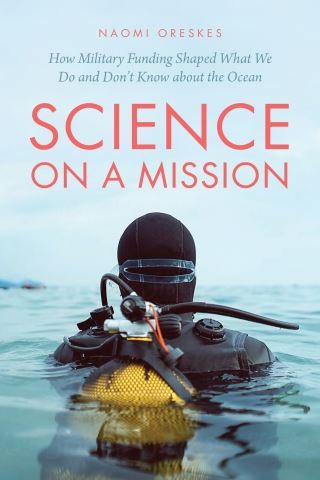 Science on a Mission

A vivid portrait of how Naval oversight shaped American oceanography, revealing what difference it makes who pays for science.

What difference does it make who pays for science?

Some might say none. If scientists seek to discover fundamental truths about the world, and they do so in an objective manner using well-established methods, then how could it matter who’s footing the bill? History, however, suggests otherwise. In science, as elsewhere, money is power. Tracing the recent history of oceanography, Naomi Oreskes discloses dramatic changes in American ocean science since the Cold War, uncovering how and why it changed. Much of it has to do with who pays.

After World War II, the US military turned to a new, uncharted theater of warfare: the deep sea. The earth sciences—particularly physical oceanography and marine geophysics—became essential to the US Navy, which poured unprecedented money and logistical support into their study. Science on a Mission brings to light how this influx of military funding was both enabling and constricting: it resulted in the creation of important domains of knowledge but also significant, lasting, and consequential domains of ignorance.

As Oreskes delves into the role of patronage in the history of science, what emerges is a vivid portrait of how naval oversight transformed what we know about the sea. It is a detailed, sweeping history that illuminates the ways funding shapes the subject, scope, and tenor of scientific work, and it raises profound questions about the purpose and character of American science. What difference does it make who pays? The short answer is: a lot.

Naomi Oreskes: Naomi Oreskes is professor of the history of science at Harvard University. She is the author of many books, including Merchants of Doubt and, most recently, Why Trust Science?