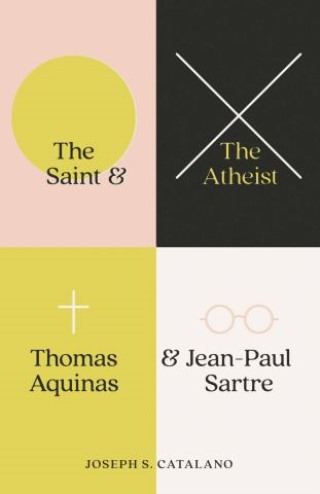 The Saint and the Atheist

It is hard to think of two philosophers less alike than St. Thomas Aquinas and Jean-Paul Sartre. Aquinas, a thirteenth-century Dominican friar, and Sartre, a twentieth-century philosopher and atheist, are separated by both time and religious beliefs. Yet, for philosopher Joseph S. Catalano, the two are worth bringing together for their shared concern with a fundamental issue: the uniqueness of each individual person and how this uniqueness relates to our mutual dependence on each other. When viewed in the context of one another, Sartre broadens and deepens Aquinas’s outlook, updating it for our present planetary and social needs. Both thinkers, as Catalano shows, bring us closer to the reality that surrounds us, and both are centrally concerned with the place of the human within a temporal realm and what stance we should take on our own freedom to act and live within that realm. Catalano shows how freedom, for Sartre, is embodied, and that this freedom further illuminates Aquinas’s notion of consciousness.
​
Compact and open to readers of varying backgrounds, this book represents Catalano’s efforts to bring a lifetime of work on Sartre into an accessible consideration of philosophical questions by placing him in conversation with Aquinas, and it serves as a primer on key ideas of both philosophers. By bringing together these two figures, Catalano offers a fruitful space for thinking through some of the central questions about faith, conscience, freedom, and the meaning of life.

Joseph S. Catalano: Joseph S. Catalano is professor emeritus of philosophy at Kean University in New Jersey and the author of several books, most recently, Reading Sartre: An Invitation. He lives in Manhattan, New York.