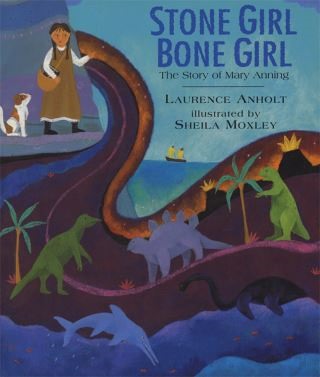 The Story of Mary Anning of Lyme Regis

As a baby, Mary was struck by lightning, then as a little girl she found a fossilised sea monster, the most important prehistoric discovery of its time. This spectacular tale of a little girl who dared to be different and who followed her dreams will inspire young children.

Beautiful illustrations and narrative text help children to learn how Mary discovered new fossils – and how her observations rocked the natural history world. Be inspired by Mary's work as a woman in the field of science – especially as her achievements weren't recognised until after her death.

Perfect for kids interested in dinosaurs and rocks, and for parents looking for strong female role models in science.

Laurence Anholt: LAURENCE ANHOLT has created over 200 books for children, published in over 30 languages. His Anholt's Artists series includes Camille and the Sunflowers, Degas and the Little Dancer, Leonard and the Flying Boy, Picasso and the Girl with a Ponytail, The Magical Garden of Claude Monet, Matisse, King of Colour and Cezanne and the Apple Boy. He has collaborated on numerous picture books with his wife, artist Catherine Anholt, including the Chimp and Zee series, also published by Frances Lincoln. Laurence has won numerous awards, including the Nestle Smarties Gold Award on two occasions. He lives in Devon.