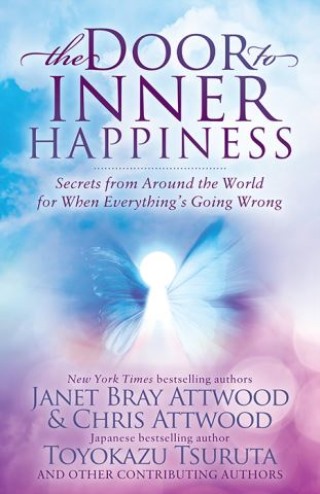 The Door to Inner Happiness

Secrets from Around the World for When Everything’s Going Wrong

The Door to Inner Happiness reveals powerful strategies from around the world for bouncing back when everything’s going wrong.

The Door to Inner Happiness shares the stories of regular people from all over the world who have found ways to turn horrendous situations into opportunities and new possibilities. It will reassure you, inspire you, and give you hope, because if these people can do it, so can you. You’ll discover that beneath our cultural differences, there is a common thread that binds us all together. This is not just another self-help book. It’s a deep dive into the heart of life through real stories of overcoming real tragedies.

Janet Bray Attwood: Janet Bray Attwood is the co-author of the New York Times Bestseller, The Passion Test and Your Hidden Riches. She is also co-author of From Sad to Glad. As an expert on what it takes to live a passionate life, she has presented her programs as a featured speaker to hundreds of thousands of people around the world, including The Dalai Lama, Sir Richard Branson, T. Harv Eker, Jack Canfield, Lisa Nichols, Stephen Covey, and Brendon Burchard. Janet is the co-founder of The Passion Test Certification Program, which has over 3000+ Certified Facilitators in over 65 countries. She is also the co-founder of The Passion Test for Business, The Passion Test for Kids & Teens, Enlightened Bestseller program, The Passion Test Reclaim Your Power Program for the homeless and The Mastery of Self Love Program. Janet co-founded one of the first online magazines, Healthy Wealthy n Wise. Prior to becoming a top transformational leader, Janet worked in the corporate world. In one of her positions, she was the marketing director for the 3rd largest book buyer in the United States, Books Are Fun, managing the marketing department for over 40 marketers. It was during her tenure there that the company was purchased by Readers Digest for 360 million dollars. Janet is a facilitator of “The Work of Byron Katie” and facilitator of the environmental symposium, “Awakening the Dreamer – Changing the Dream” and a “Certified Strategic Synchronicity Leader”.|||Chris Attwood is a leading figure in the transformational world and a master of creating "enlightened alliances". He is co-author of two New York Times bestselling books, The Passion Test and Your Hidden Riches. With his business partner and ex-wife, Janet Bray Attwood, he built a global brand with over 3,500 Passion Test facilitators in more than 65 countries. Chris has created some of the major strategic alliances in the transformational industry, including his key role in arranging 70% of the interviews for the book and movie phenomenon, The Secret. Chris is a founding member of the Transformational Leadership Council created by Jack Canfield. Over the past 30 years, Chris has been CEO or senior executive of more than a dozen companies. After resigning as President of a government securities dealer in the early 1980s, he took 10 years for his own inner development, spending 8-10 hours a day in deep meditation. During this time, Chris extensively studied the Vedic literature of India and the functioning of human consciousness. A regular meditation practice has been part of his daily routine for more than 45 years.|||Toyokazu Tsuruta is a bestselling author in Japan. More than 200,000 people have bought his books. As a behavioral psychology consultant, he has supported life transformation for 10,000+ people, leading them to their true calling and helping them to achieve their dreams. Before starting his own company, Toyokazu worked in human relations at Microsoft. His experiences interviewing thousands of people provided him with a vast knowledge about various career paths. His achievements at Microsoft placed him in the top 3% of his peers. Because of his successes, he was awarded an Asia Gold Club Award. Janet Bray Attwood, New York Times bestselling author and creator of The Passion Test, credits Toyokazu for single-handedly bringing The Passion Test to Japan. As a result, there are now over 200 Passion Test facilitators in Japan and tens of thousands of people have completed this simple process for discovering one’s passions and living a passionate life.