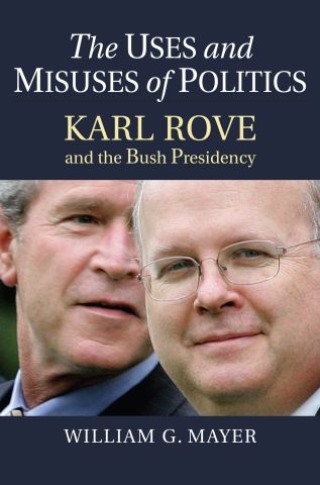 The Uses and Misuses of Politics

Karl Rove and the Bush Presidency

The Uses and Misuses of Politics is a detailed examination of the politics of George W. Bush’s presidency, focusing on the work—and the mistakes—of presidential political advisor Karl Rove. In his role as political advisor Karl Rove stands apart from his numerous counterparts in modern American politics in three major ways. The first measure of Rove’s distinctiveness is the totality of his direction over Bush’s political career. Simply put, George W. Bush never won an election, of any kind, in which Rove was not the dominant, even sole campaign strategist. A second important difference between Karl Rove and other major presidential campaign strategists was the role that Rove played in helping formulate policy after Bush became president. In fact, Rove became the first presidential aide to both provide political advice to a sitting president while at the same time controlling the policy levers inside the White House, especially as an advocate for his own agenda in the areas of domestic policy. Finally, Karl Rove is noteworthy for the scope of his ambitions: his goal for the Bush presidency was to create a durable Republican majority that would dominate American politics for the next several decades.
,br>Even though theories of party systems and realignments have received serious challenges, Karl Rove was a believer; providing a key insight into how he approached his work with the Bush presidency. Where previous realignments were the result of historical accidents and recognized only after the fact, Karl Rove believed he could engineer the next one.

In The Uses and Misuses of Politics William G. Mayer analyzes Karl Rove’s performance as presidential advisor: the roles he played, the advice he gave, and how the Republican Party fared with Rove as its principal strategist. By offering the reader a comprehensive assessment, Mayer provides valuable insight into the larger, enduring, and critical questions: What is the proper role of politics in the contemporary presidency? When does politics enhance a nation’s long-term welfare, and what does it detract from it? And what positive contributions can political advisors make to a modern-day president?

William G. Mayer: William G. Mayer is professor of political science at Northeastern University and the author of numerous articles and books, including The Changing American Mind and The Divided Democrats.