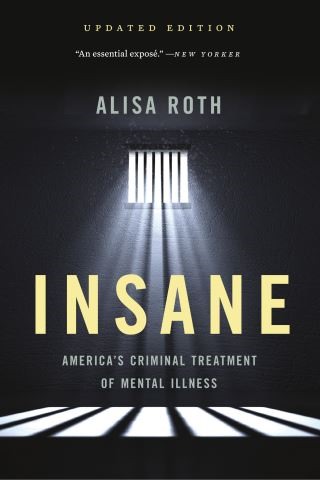 An urgent exposÃ©f the mental health crisis in our courts, jails, and prisons

America has made mental illness a crime. Jails in New York, Los Angeles, and Chicago each house more people with mental illnesses than any hospital. As many as half of all people in America's jails and prisons have a psychiatric disorder. One in four fatal police shootings involves a person with such disorders.

In this revelatory book, journalist Alisa Roth goes deep inside the criminal justice system to show how and why it has become a warehouse where inmates are denied proper treatment, abused, and punished in ways that make them sicker.

Through intimate stories of people in the system and those trying to fix it, Roth reveals the hidden forces behind this crisis and suggests how a fairer and more humane approach might look. Insane is a galvanizing wake-up call for criminal justice reformers and anyone concerned about the plight of our most vulnerable.

Alisa Roth: Alisa Roth is the mental health correspondent for Minnesota Public Radio and frequent contributor to various NPR programs. A Soros Justice Fellow, her work has also appeared in the New York Review of Books and New York Times. She lives in St. Paul, Minnesota.