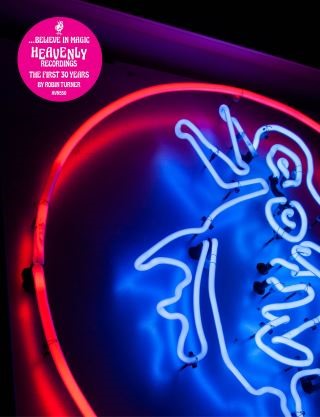 'Heavenly is more than a record label, it's the absolute nectar of all that's brilliant in the culture of these island. I love the shit out of them and everything they stand for.' Irvine Welsh

BELIEVE IN MAGIC tells the story of Heavenly Recordings in thirty vignettes, photography and ephemera, all of which relate to landmark records, moments and characters in the label's first three decades.

A label responsible for creating satellite communities of fans around the world and at all the major festivals, Heavenly was set up by Jeff Barrett in 1990 after several years working for Factory and Creation as the acid house revolution was in full swing; early releases set the tone and tempo for the mood of the decade to come - their first single was produced by perhaps the most revered acid house DJ of them all, Andrew Weatherall; and this was quickly followed by era-defining singles from Saint Etienne, Flowered Up and Manic Street Preachers, music which perhaps captures the flavour of the early '90s better than any other.

Heavenly was always tuned to an aesthetic that was sensitive to the anarchic spirt of the times; defiantly eclectic with a radar set to taste and a never-ending commitment to discovering new talent. In 1994 they set up The Heavenly Sunday Social, which became one of the most influential and mythologised clubs in recent British history, where the Chemical Brothers - then the Dust Brothers - made their name. For thirteen weeks, it was the hottest nightclub on the planet. For 180 demented acolytes in a basement room below the Albany pub.

Over nearly 200 releases in thirty years Heavenly have consistently produced some of the most exciting music across all genres, and this book collects rare artwork and wild anecdotal evidence into a celebration of a label that is one of the most beloved institutions on the independent landscape.

Robin Turner works for Heavenly Recordings, where he started the legendary Heavenly Sunday Social in 1994. He's the co-creator of The Social chain of bars in London, Bristol and Nottingham.