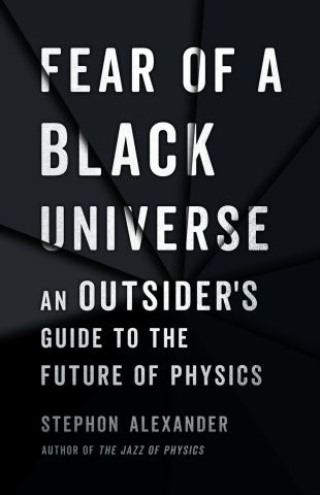 Fear of a Black Universe

An Outsider's Guide to the Future of Physics

"The rabbit hole gets wrestled here. An old school saying applies: the more you know, the more you don’t know. Dance along this read into the unknown and find out that this book may be the best ever answer to ‘What is soul?'"
—Chuck D, rapper and co-founder of Public Enemy

*Starred Reviews* from Kirkus and Publishers Weekly!
Named a Best Book of 2021 by Library Journal, Kirkus, and symmetry Magazine

In this important guide to science and society, a cosmologist argues that physics must embrace the excluded, listen to the unheard, and be unafraid of being wrong.

Years ago, cosmologist Stephon Alexander received life-changing advice: to discover real physics, he needed to stop memorizing and start taking risks. In Fear of a Black Universe, Alexander shows that great physics requires us to think outside the mainstream -- to improvise and rely on intuition. His approach leads him to three principles that shape all theories of the universe: the principle of invariance, the quantum principle, and the principle of emergence. Alexander uses them to explore some of physics' greatest mysteries, from what happened before the big bang to how the universe makes consciousness possible. Drawing on his experience as a Black physicist, he makes a powerful case for diversifying our scientific communities. Compelling and empowering, Fear of a Black Universe offers remarkable insight into the art of physics.

Stephon Alexander: Stephon Alexander is a professor of theoretical physics at Brown University, an established jazz musician, and an immigrant from Trinidad who grew up in the Bronx. He is the 2020 president of the National Society of Black Physicists and a founding faculty Director of Brown University's Presidential Scholars program, which boosts underrepresented students. In addition to his academic achievements, he was the scientific consultant to Ava DuVernay for the feature film A Wrinkle in Time. His work has been featured by the New York Times, the Wall Street Journal, WIRED, and many other outlets. He has been a guest on Nova, the “Brian Lehrer Show”, and Neil deGrasse Tyson's “StarTalk,” among much else. The author of Fear of a Black Universe and The Jazz of Physics, Alexander lives in Providence, Rhode Island.