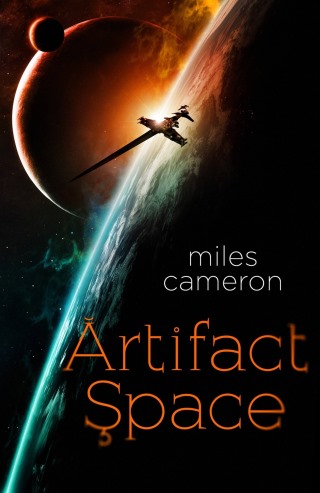 Out in the darkness of space, something is targeting the Greatships.

With their vast cargo holds and a crew that could fill a city, the Greatships are the lifeblood of human occupied space, transporting an unimaginable volume - and value - of goods from City, the greatest human orbital, all the way to Tradepoint at the other, to trade for xenoglas with an unknowable alien species.

It has always been Marca Nbaro's dream to achieve the near-impossible: escape her upbringing and venture into space.

All it took, to make her way onto the crew of the Greatship Athens was thousands of hours in simulators, dedication, and pawning or selling every scrap of her old life in order to forge a new one. But though she's made her way onboard with faked papers, leaving her old life - and scandals - behind isn't so easy.

She may have just combined all the dangers of her former life, with all the perils of the new . . .

Miles Cameron: Miles Cameron is a full time writer who lives in Canada with his family. He also writes historical fiction under the name Christian Cameron.