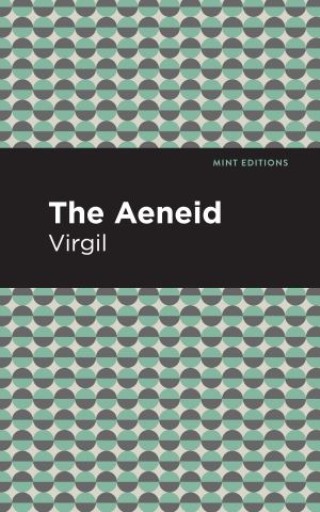 “In the whole of European literature there is no poet who can furnish the texts for a more significant variety of discourse than Virgil. [He] symbolizes so much in the history of Europe, and represents such central European values…” –T.S. Eliot

The Aeneid (19 BC) is an epic poem by Roman poet Virgil. Translated by English poet laureate John Dryden in 1697, Virgil’s legendary epic is the story of the hero Aeneas, a castaway from Troy whose adventures across the Mediterranean led him to Italy, where he discovered what would later become the city of Rome. Presented here in faithful translation, though rearranged to accommodate Dryden’s rhyming couplets, The Aeneid is a treasure of classical literature and a story of romance, war, and adventure to rival the best of Homer.

“Arms, and the man I sing, who, forc’d by fate, / And haughty Juno’s unrelenting hate, / Expell’d and exil’d, left the Trojan shore.” Fleeing the destruction of Troy by Greek forces, Aeneas brings his son Ascanius and father Anchises on a voyage across the sea. Landing in Carthage, Aeneas, his family, and his crew are rescued by Dido, Queen of Tyre. There, Aeneas, despite mourning the loss of his beloved wife Creusa, falls in love with Dido, who offers him refuge and her devoted love. Knowing that he is destined to found a city in Italy, however, Aeneas abandons the queen, leading her to commit suicide. Now determined to fulfill his destiny at any cost, Aeneas sails to Sicily, journeys to the underworld, and eventually arrives in the region of Latium, where he is swept up in conflict with Turnus, the Rutulian king. Flawed and feared, Aeneas exemplifies the imperfect hero compelled by fate and the gods, yet ultimately driven through a will to survive and provide for his fledgling people.

With a beautifully designed cover and professionally typeset manuscript, this edition of Virgil’s The Aeneid is a classic work of Roman literature reimagined for modern readers.

Virgil (70 BC-19 BC) was a Roman poet. He was born near Mantua in northern Italy. Educated in rhetoric, medicine, astronomy, and philosophy, Virgil moved to Rome where he was known as a particularly shy member of Catullus’ literary circle. Suffering from poor health for most of his life, Virgil began his career as a poet while studying Epicureanism in Naples. Around 38 BC, he published the Eclogues, a series of pastoral poems in the style of Hellenistic poet Theocritus. In 29 BC, Virgil published his next work, the Georgics, a long didactic poem on farming in the tradition of Hesiod’s Works and Days. In the last decade of his life, Virgil worked on his masterpiece the Aeneid, an epic poem commissioned by Emperor Augustus. Expanding upon the story of the Trojan War as explored in Homer’s Iliad and Odyssey, the Aeneid follows the hero Aeneas from the destruction of Troy to the discovery of the region that would later become Rome. Posthumously considered Rome’s national poet, Virgil’s reputation has grown through the centuries—in large part for his formative influence on Dante’s Divine Comedy—to secure his position as a foundational figure for all of Western literature.