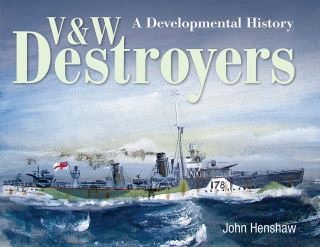 “A very interesting book tracing the development and service of . . . one of the iconic destroyers of the Second World War.” —Australian Naval Institute

In this book John Henshaw takes the reader through all the developmental stages of the V & W Class with a detailed history of the step-by-step lessons that were learned, not all of which were fortuitous. In one package the Royal Navy finally acquired a hull that possessed not just good sea-keeping capability but one that was able to carry heavier armament without any adverse effects. Range and speed were commensurate with their size while the superfiring guns, fore and aft, could be deployed in all weathers for a four-gun broadside. The V & W design set the trend for all destroyer design for the next two decades and, indeed, the basic layout of destroyers stayed the same long beyond that. The formula of a raised foredeck and superfiring guns fore and aft continued in the Royal Navy until the Battle Class of 1944 and in the United States Navy until the Fletcher Class of 1943. That the V & Ws served on through World War II in various forms is a testament to the soundness of the basic concept, their adaptability and strength. The V stood for Venerable, because they certainly proved that, and W for Watershed, because they were truly a turning point in destroyer design.

This book, which will appeal both to naval historians and modelmakers, brings together under one cover a narrative that is comprehensive in its scope, well researched and elegantly supported with detailed line drawings and selected photographs for the period 1890–1945.

John Henshaw: John Henshaw is a retired chartered surveyor, educated at Wesley College and Melbourne University. He spent most of his working career designing and constructing buildings of all types from domstic houses to office buildings. He has always had a love of the sea and owned several yachts, cruising Australia’s North East Coast extensively. He is also an accomplished marine watercolour painter and ship modeller and a fine technical draughtsman. His beautiful linework is a highlight of this book.