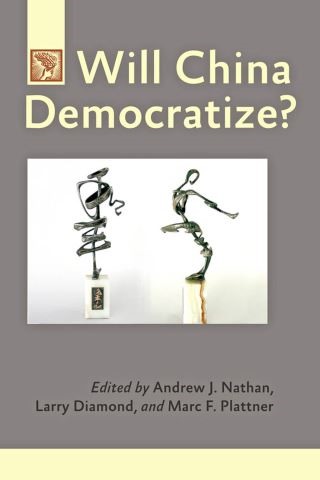 Leading experts on China offer their enlightening analysis on one of the most crucial and complex questions facing the future of international politics.

Moving toward open markets and international trade has brought extraordinary economic success to China, yet its leadership still maintains an authoritarian grip over its massive population. From repressing political movements to controlling internet traffic, China’s undemocratic policies present an attractive model for other authoritarian regimes. But can China continue its growth without political reform? In Will China Democratize?, Andrew J. Nathan, Larry Diamond, and Marc F. Plattner present valuable analysis for anyone wondering if, when or how China might evolve politically.

Since the Journal of Democracy’s very first issue in January 1990, which featured articles reflecting on the then-recent Tiananmen Square massacre, the Journal has regularly published articles about China and its politics. By bringing together the wide spectrum of views that have appeared in the Journal’s pages—from contributors including Fang Lizhi, Perry Link, Michel Oksenberg, Minxin Pei, Henry S. Rowen, and Nobel laureate Liu Xiaobo— Will China Democratize? provides a clear view of the complex forces driving change in China’s regime and society.