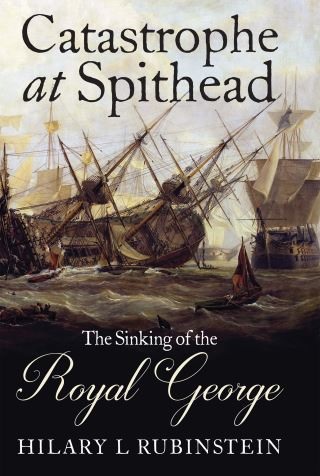 The Sinking of the Royal George

This fascinating historical inquiry sheds new light on the mysterious sinking of an 18th century warship and its lingering effect on British naval culture.

On August 29th, 1782, the mighty flagship HMS Royal George suddenly capsized while anchored in the calm, familiar waters of Spithead on the English Channel. In one of the most sensational and perplexing incidents in naval history, Rear Admiral Richard Kempenfelt, an outstanding veteran officer, drowned along with more than 800 crew and many civilian visitors.

Catastrophe at Spithead is the first comprehensive account of the sinking, drawn from a variety of archival sources, including reports by survivors and eyewitnesses. Hilary L. Rubinstein examines the mysterious cause and tragic cost of the disaster, as well as its lingering aftereffects, including its treatment in literature.

As well as describing the sinking, Rubenstein uncovers new information on the life and career of Rear Admiral Kempenfelt, ranging from his familial relation to the great Admiral Rodney to accounts of his whereabouts when the ship sank. These call into question the scenario in William Cowper's famous poem, “On the Sinking of the Royal George,” which depicts Kempenfelt writing in his cabin when she foundered.

Hilary L. Rubinstein: HILARY L RUBINSTEIN has spent a lifetime writing on British naval history during the age of sail. She has a PhD in History from the Australian National University and is a Fellow of the Royal Historical Society; she was a former Council member of the Navy Records Society and edited the Society’s newsletter. She also contributed to Nelson's Band of Brothers: Their Lives and Memorials, edited by Peter Hore and published by Seaforth in 2015.