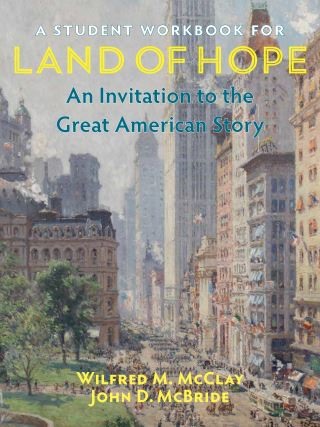 A Student Workbook for Land of Hope

An Invitation to the Great American Story

When we published Land of Hope in May of 2019, we had an immediate response from teachers and students that (1) they loved the book, and (2) they would need ancillary materials to aid them in the use of the book for classroom instruction. We jumped right on that, and produced a Teacher's Guide, which appeared in spring of 2020, and we're now following up with a Student Workbook, which is completely coordinated with the Teacher's Guide, featuring study questions (which can also be used for testing by teachers), objective exercises (matching, identification, temporal ordering), primary-source documents and accompanying study questions, a section of map exercises which include in-text outline maps for student use, as well as back-of-the-book resources such as reference tables for the British monarchy, the American presidency, and a list of suggestive questions that are suitable for extended essays or term papers. It is the perfect resource for both classroom teaching, home education, and hybrid versions of both.

Wilfred M. McClay is the G. T. and Libby Blankenship Chair in the History of Liberty at the University of Oklahoma. He served from 2002 to 2013 on the National Council on the Humanities, the advisory board for the National Endowment for the Humanities, and is currently serving on the U.S. Semiquincentennial Commission, which is planning for the 250th anniversary of the United States in 2026. Among his books is The Masterless: Self and Society in Modern America, which won the 1995 Merle Curti Award of the Organization of American Historians for the best book in American intellectual history. He was educated at St. John’s College (Annapolis) and received his Ph.D. from the Johns Hopkins University.

John McBride was educated at Rice University (BA 1968, MA 1971) and the University of Virginia (PhD 1977). He taught high school (mostly US History AP) in Chattanooga TN from 1974 to 2010, at the Baylor School and David Brainerd Christian School. He has also taught as an adjunct for the past 25 years at the University of Tennessee at Chattanooga, in political science and in history. For the past six years he has taught (as a volunteer and most recently as an adjunct for Georgia State University) at Walker State Prison, which is Georgia's character-and-faith-based prison. He enjoys employing a wide variety of teaching methods, including games, trivium-style debates, and group projects.