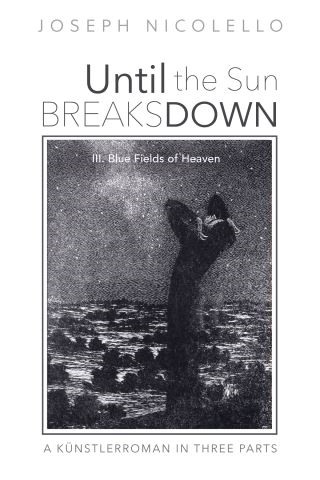 Until the Sun Breaks Down: A Künstlerroman in Three Parts

Written when the author was in his early and mid-twenties, Until the Sun Breaks Down is a contemporary American Kunstlerroman modeled on Dante's Divine Comedy. In three parts and one hundred chapters that mirror Dante's classic poem, Nicolello takes the reader through present-day American towns and cities: infernal, purgatorial, and paradisal aspects with nothing left off the table. In the third and final volume, structurally modeled on Dante's Paradiso, the national themes of interior and exterior decline reach a head before anything like peace is found for anyone. For that matter, the text takes on an Augustinian turn: the City of Man vs. the City of God, with William Fellows coming to the end of the line of temporal pleasures and escapes, and even disillusionment with San Francisco, or the furthest end of western civilization. It is here that the character Octavia begins to take on the role of Beatrice, guiding William to safe passage--but not before hallucinatory episodes in both the city and the town, or San Francisco and Jerusalem.

Joseph Nicolello: Joseph Nicolello is a graduate student and instructor at Fordham University. Before abruptly retiring from novelistic discourse at twenty-five years old to focus exclusively on pedagogy and scholarly writings, Nicolello also wrote the novella A Child’s Christmas in Williamsburg (October 2020).