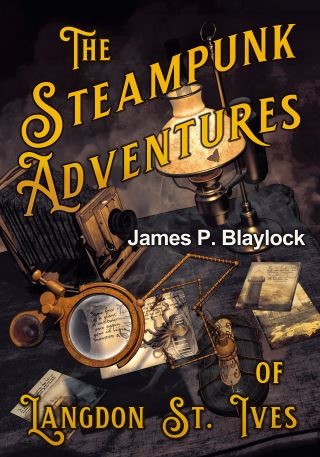 St. Ives, traveler through time and space and an often misunderstood member of the Explorers Club and the Royal Society, has trodden the foggy London streets and Thames-side alleyways for decades, caught up in near-death adventures in pursuit of nefarious villains and obscure knowledge.

In the pages of this chronicle, the intrepid Professor and his stalwart friends face down strange enemies and avert catastrophes that the world scarcely knows exist, finding themselves stalked through the idol-infested jungles of Borneo, set adrift in the starlit reaches of outer space, plunged into the infamous “barrel madness” that descended upon London in the late 18th century, and wandering in a past-and-future age when they stumble upon a time portal in the midst of ancient standing stones in the idyllic Kent countryside.

World Fantasy Award winning author James Blaylock, one of the pioneers of the Steampunk genre along with Tim Powers and K.W. Jeter, has written more than 25 novels as well as scores of short stories, essays, and articles. His Steampunk novel Homunculus won the Philip K. Dick Memorial Award, and his short story “The Ape-box Affair,” published in Unearth magazine in 1978, was the first contemporary Steampunk story published in the U.S. His recent Steampunk works include The Aylesford Skull, Beneath London, River’s Edge, and The Gobblin’ Society.

“A singular American fabulist.” —William Gibson
“Blaylock is a magician!” —Michael Swanwick
“Blaylock’s prose is so rich it literally sings!” —Charles de Lint
“Blaylock is better than anyone else at showing us the magic that secretly animates our world...” —Tim Powers
“While many recent novels have picked up the steampunk banner, this one fully delivers, offering action, farce, tender relationships, and prose full of genuine Victorian cadence and flavor.” —Publishers Weekly on The Affair of the Chalk Cliffs
“St. Ives has to be one of the most fleshed out Victorian characters ever written, and I m sincerely hoping that Blaylock isn t finished with this scientist adventurer. The Aylesford Skull can easily stand alone without any knowledge of Blaylock s previous steampunk stories, but you’ll want to hunt down additional St. Ives tales, I’m for certain.” —Wired.com
“Blaylock throws in all the furniture of the genre: derring-do and cliffhangers, a vivid portrayal of Victorian London, a gallery of grotesque characters and the obligatory airship, but the strength of the novel is his rendering of St Ives caught between his love of the chase and his commitment to family.” —The Guardian

James P. Blaylock: James P. Blaylock was mentored by Philip K. Dick, along with K.W. Jeter and Tim Powers, and is regarded as one of the founding fathers of modern steampunk. Winner of two World Fantasy Awards and a Philip K. Dick Award, he is director of the Creative Writing Conservatory at the Orange County School of the Arts and a professor at Chapman University, where he has taught for 20 years.