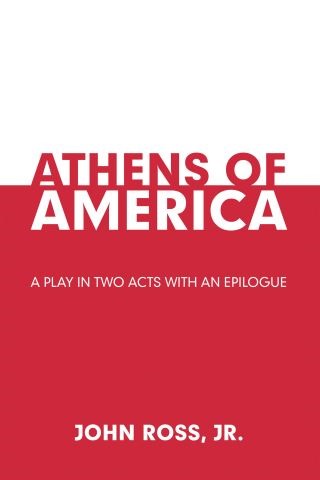 A Play in Two Acts with an Epilogue

ATHENS OF AMERICA: A Play in Two Acts with and Epilogue is inspired by and loosely based upon, Il giaco delle parti (Rules of the Game) by Luigi Pirandello (1867-1936). Set in a popular Italian neighborhood simply known as: Boston’s North End, Athens of America explores marital betrayal, worshipful jealousy and boyhood rivalry. Midst Emily Dickenson, foreboding Latin phrases, the paranormal and pious ritual, this new work unites the immortal leitmotifs of classic Pirandellian drama. Here, illusion, hope, individualism and psychological exploitation meet head-on with Jim Morrison, NASA, art galleries and the meticulous niceties of gourmet cooking. The play’s entire ensemble is persistently gripped by the trials of bewildered identities, contrived fantasies and the outcomes of their own distorted self-images. In this new play, we immediately recognize how oftentimes our own sense of self may solely exist in relation to others and their own premeditated and controlling cosmologies. Each character is habitually trapped by shifting facets of overwhelming desire, ones shrouding themselves in a consuming abyss of delusion, deceit and duplicity. This is a play of verbal pretext, ominous revelation and ultimate tragic vengeance. * * * * * * * * * A lesser known moniker for the city Boston is “The Athens of America”, used mainly in literary circles during the first half of the 20th Century. One of the alleged sources is to be found in a letter written in 1764 by Samuel Adams (along with many other suspected sources of imprecise origin.) * * * * * * * * * “Just to be in Boston, in Cambridge, on a Monday night was very horrifying to me. It frightens me . . . All the stores closing up by 5 or 6, coffeehouses being open maybe until 11, just the sense that the world shuts down and you're left with yourself.” –Ann Douglas

John Ross Jr.: John Ross, Jr. holds graduate degrees from Boston University and Harvard; and also holds a Graduate degree in Theatre from the University of Illinois at Chicago. He is the author of four previous poetry collections including the popular: Genes, Germs, Geodes and God (2016) along with Where the designer came from: Evolution, Creation, Hominids and the Skirmish of the Double Helix (2011). He teaches communications and theatre at Northeastern Illinois University in Chicago.