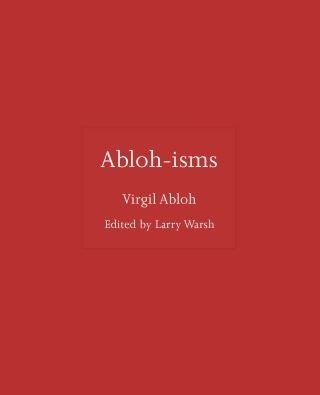 A collection of essential quotations from the renowned fashion designer, DJ, and stylist

Abloh-isms is a collection of essential quotations from American fashion designer, DJ, and stylist Virgil Abloh, who has established himself as a major creative figure in the worlds of pop culture and art. Abloh began his career as Kanye West’s creative director before founding the luxury streetwear label Off-White and becoming artistic director for Louis Vuitton, making Abloh the first American of African descent to hold that title at a French fashion house. Defying categorization, Abloh’s work has been the subject of solo exhibitions at museums and galleries, most notably in a major retrospective at the Museum of Contemporary Art Chicago. Gathered from interviews and other sources, this selection of compelling and memorable quotations from the designer reveals his thoughts on a wide range of subjects, including creativity, passion, innovation, race, and what it means to be an artist of his generation. Lively and thought-provoking, these quotes reflect Abloh’s unique perspective as a trailblazer in his fields.

Select quotations from the book:

Virgil Abloh: Virgil Abloh is artistic director of the menswear collection at Louis Vuitton and founder and CEO of the fashion label Off-White. He was named one of the 100 most influential people in the world by Time magazine in 2018 and has been profiled in the New York Times, the New Yorker, Vogue, and many other publications. He lives in Chicago. Instagram and Twitter @virgilabloh Larry Warsh has been active in the art world for more than thirty years as a publisher and artist-collaborator and was a founding member of the Basquiat Authentication Committee until its dissolution in 2012. He is also the editor of Weiwei-isms and Humanity, by Ai Weiwei; Basquiat-isms and The Notebooks, by Jean-Michel Basquiat; and Haring-isms, by Keith Haring (all Princeton).