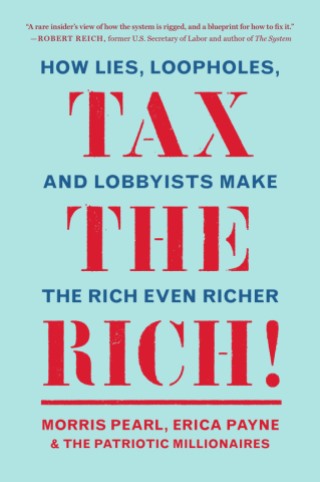 How Lies, Loopholes, and Lobbyists Make the Rich Even Richer

Media Coverage: Patriotic Millionaires is a media machine and is routinely covered across major media with over 1000 news stories featuring the group and 150 op-eds in local and national outlets in the last two years. Morris Pearl, the Chair of Patriotic Millionaires and author of Tax the Rich!, routinely appears on NPR, CNBC, ABC News, and Fox Business, among others.

Format: Like the highly successful New Press books Field Guide to the US Economy and Field Guide to the Global Economy the book will be a paperback original and will be full of graphics, charts, cartoons, and other visual elements.

Morris Pearl: Morris Pearl, a former managing director of BlackRock, is chair of the Patriotic Millionaires, a group of hundreds of high-net-worth Americans committed to making all Americans better off by building a more prosperous, stable, and inclusive nation, and ensuring that millionaires, billionaires, and corporations pay their fair share of taxes. The co-author, with Erica Payne, of Tax the Rich! How to Make Millionaires Pay Their Fair Share, he lives in New York City.