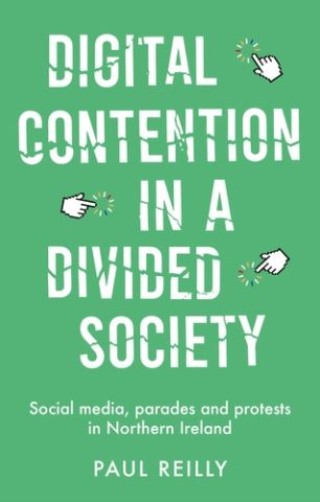 Digital contention in a divided society

How are platforms such as Facebook and Twitter used by citizens to frame contentious parades and protests in ‘post-conflict’ Northern Ireland? What do these contentious episodes tell us about the potential of information and communication technologies to promote positive intergroup contact in the deeply divided society? These issues are addressed in what is the first in-depth qualitative exploration of how social media were used during the union flag protests (December 2012-March 2013) and the Ardoyne parade disputes (July 2014 and 2015). The book focuses on the extent to which affective publics, mobilised and connected via expressions of solidarity on social media, appear to escalate or de-escalate sectarian tensions caused by these hybrid media events. It also explores whether citizen activity on these online platforms has the potential to contribute to peacebuilding in Northern Ireland.

Paul Reilly: Paul Reilly is a Senior Lecturer in Social Media and Digital Society at the University of Sheffield