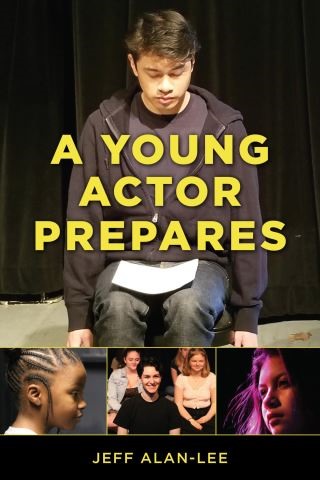 In A Young Actor Prepares, Jeff Alan-Lee masterfully delivers kids' and teens' acting classes presented as plays in script form. The classes are based on actual semesters at the Young Actor's Studio in Los Angeles and provide step-by-step approaches to help children and teenagers portray complex characters and tackle emotionally challenging roles.

For over thirty years, Alan-Lee has worked with thousands of young people, teaching the work presented in this book. His work has been the springboard for award-winning artists in acting, directing, playwriting, screenwriting, and music. Inspired by Stanislavski's An Actor Prepares, Alan-Lee has developed engaging and exciting ways to create great acting, using a unique version of the Stanislavski system that he reworked for the young actor. It's a fun and easy method to help children and teens learn to apply Stanislavski-based exercises and use their own their own life experiences, imagination, and emotions to create authentic acting and performances.

The book is for kids and teens, as well as teachers and parents. Kids and teens can find relatable characters and gain a deeper ability to make their acting shine. Teachers will get a unique look at how to handle a multitude of personalities while teaching the real work to children as young as eight. Parents will discover an actor's process that can lead their kids to greater self-esteem and creativity in all the arts.

Jeff Alan-Lee is the artistic director of the Young Actor’s Studio and a top acting coach in Los Angeles. He has taught and directed young people for over thirty years, both in New York and Los Angeles. He was a former child actor himself and began acting with his own television series at age nine. He has a BFA from New York University and has taught and directed at private schools, public schools, and youth shelters as well as teaching and directing children and teens at the Lee Strasberg Theatre Institutes in New York and Los Angeles. His students include Shia LaBeouf and Scarlett Johansson, among many other great actors working in all areas of entertainment.