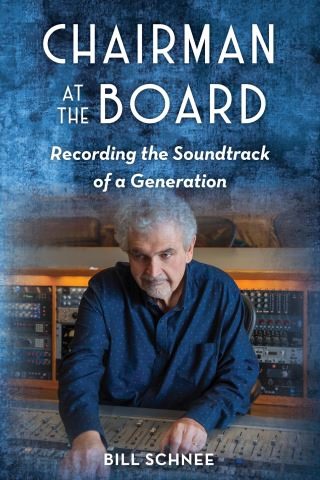 Chairman at the Board

Recording the Soundtrack of a Generation

Chairman at the Board is an intimate, funny, and absorbing look at the music business by an insider who has recorded a host of the greatest musical artists from the 1970s to today. Bill Schnee takes the reader inside the studio—behind the curtain—and through the decades with a cavalcade of famous artists as he helped them to realize their vision.

After his high school band was dropped by Decca Records, Schnee began his quest to learn everything he could about making records. Mentored by technical guru Toby Foster, mastering guru Doug Sax, and recording legend Richie Podolor at his American Recording Studio, he immediately began recording the top acts of the day as a freelance engineer/producer in Hollywood. Clive Davis soon hired him to work for CBS where he partnered with famed music producer Richard Perry. Schnee went on to record and/or mix many of Perry's biggest albums of the '70s and '80s, including those by Barbra Streisand, Carly Simon, Ringo Starr, Art Garfunkel, and the Pointer Sisters.

With his deft personal touch with musicians, he continued to engineer and/or produce the likes of Marvin Gaye, Thelma Houston (the Grammy-nominated, direct-to-disc album I've Got the Music in Me), Pablo Cruise, Neil Diamond, Boz Scaggs, the Jacksons, Huey Lewis and the News, Dire Straits, and Whitney Houston.

With over 125 gold and platinum records, and two Grammys for Steely Dan's Aja and Gaucho, Schnee has been called a living legend—recognized and respected in the industry as the consummate music man with an incomparable career that he lovingly shares with his readers in humorous detail.

Bill Schnee: Bill Schnee is an internationally renowned producer, engineer, and mix master. He has engineered and produced an extremely wide variety of artists that include Three Dog Night, Barbra Streisand, Neil Diamond, Huey Lewis, Pablo Cruise, Steely Dan, the Jacksons, Marvin Gaye, Boz Scaggs, Dire Straits, Ringo (with all the Beatles), Carly Simon, the Pointer Sisters, and Whitney Houston, including her mega-single "I Will Always Love You." Schnee has been personally nominated eleven times for the Best Engineered Recording Grammy and has won twice for Steely Dan's Aja and Gaucho. He currently resides in Franklin, Tennessee, with his wife, Sallie.