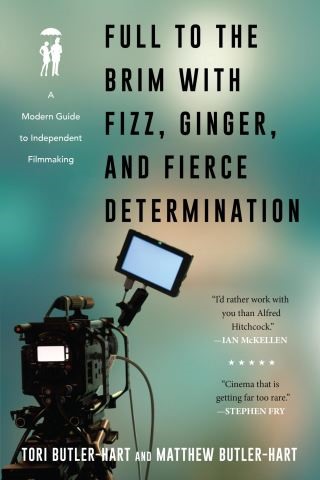 Full to the Brim with Fizz, Ginger, and Fierce Determination

A Modern Guide to Independent Filmmaking

Want to learn valuable secrets about making your own low-budget films? This book is at once Tori and Matthew Butler-Hart’s personal account of their ten-year adventure running their own film production company and a manual loaded with tips on how to survive—and thrive—in the modern independent movie business.

Since founding Fizz and Ginger Films in 2009, the Butler-Harts have spent the past decade writing, producing, directing, line producing, and promoting both their own and other people’s films. In Full to the Brim with Fizz, Ginger and Fierce Determination, the duo looks back and takes stock of what they've learned in their sometimes turbulent creative journey.

Rather than a step-by-step guide of how-tos, Tori and Matthew offer real-life lessons in making independent feature films, including useful tips and pitfalls to avoid. From the very first stages of writing a screenplay to securing financing, producing and shooting the movie, post-production and distribution—each area is explored and explained through anecdotes and interviews with other professionals involved in the industry, including Sir Ian McKellen, Stephen Fry, and legendary producer Margaret Matheson. Full to the Brim with Fizz, Ginger and Fierce Determination is a must-read for young actors, writers, directors, producers, or all of the above, hoping to tell their own stories through the magical art of moving pictures.

Husband-and-wife team Tori and Matthew Butler-Hart started their film production company, Fizz and Ginger Films, in 2009, born from a desire to have more control over their own careers—Matthew wanting to move into writing and directing and Tori keen to create the type of roles she wanted to play. Having both trained as actors in London at top drama schools, they met while performing in a play and over the past decade have forged careers as actors, directors, screenwriters, and producers. They have successfully released three of their own multi-award-winning feature films, as well as co-producing and assisting on many others.

|||Independent film maker in the UK, Fizz and Ginger Films