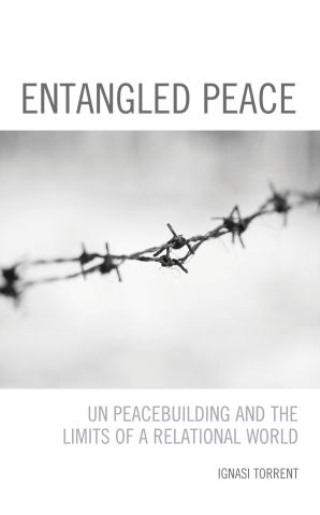 UN Peacebuilding and the Limits of a Relational World

This book unfolds an exploratory journey intended to scrutinise the suitability of entanglements and relations as a mode of thinking and seeing peacebuilding events. Through a reflection upon the UN’s limited results in the endeavour towards securing lasting peace in war-torn scenarios, Torrent critically engages with three relevant debates in contemporary peacebuilding literature, including the inclusion of ‘the locals’, the achievement of organisational system-wide coherence and the increasingly questioned agential condition of peacebuilding actors. Inattentive to the relational vulnerability of involved stakeholders, it is suggested that the UN seeks to secure a totalising modern distory, defined in the book as a story that undoes other stories. Whilst affirming the entangled ontogenesis of actors and processes in the conflict-affected configuration, Entangled Peace also delves into a cautionary argument about what the author refers to as entanglement fetishism, namely the celebratory, normative, deterministic and exclusionary projection of a relational world. Inspired by Alfred North Whitehead, Entangled Peace is an invitation to speculate over the peacebuilding milieu, and by extension the broader theatre of the real, as radical openness, in which events emanate from the collision of an infinite multiplicity of possible worlds.

Ignasi Torrent: Ignasi Torrent is a Lecturer in Politics and International Relations at the School of Humanities at University of Hertfordshire.