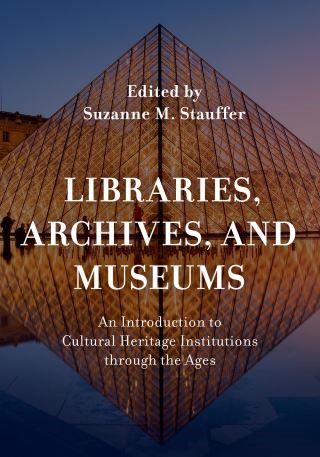 An Introduction to Cultural Heritage Institutions through the Ages

This is the first book to consider the development of all three cultural heritage institutions – libraries, archives, and museums – and their interactions with society and culture from ancient history to the present day in Western Europe, the United Kingdom, and the United States.

The text explores the social and cultural role of these institutions in the societies that created them, as well as the political, economic and social influences on their mission, philosophy, and services and how those changed throughout time. The work provides a thorough background in the topic for graduate students and professionals in the fields of library and information science, archival studies, and museum resource management, preservation, and administration.

Arranged chronologically, the story begins with the temple libraries of ancient Sumer, followed the growth and development of governmental and private libraries in ancient Greece and Rome, the influence of Asia and Islam on Western library development, the role of Christianity in the preservation of ancient literature as well as the skills of reading and writing during the Middle Ages, and the coming of the Renaissance and the rise of the university library. It continues by tracing the gradual division between archives and libraries and the growth of governmental and private libraries as independent institutions during and after the Renaissance and through the Enlightenment, and the development of public and private museums from the “cabinets of curiousities” of private collectors beginning in the 17th century. Individual chapters explore the further growth and development of libraries, archives, and museums in the 19th and 20th centuries, exploring the public library and public museum movements of those centuries, as well as the rise of the governmental and institutional archive. The final chapter discusses the growing collaboration between and even convergence of these institutions in the 21st century and the impact of modern information technology, and makes predictions about the future of all three institutions.