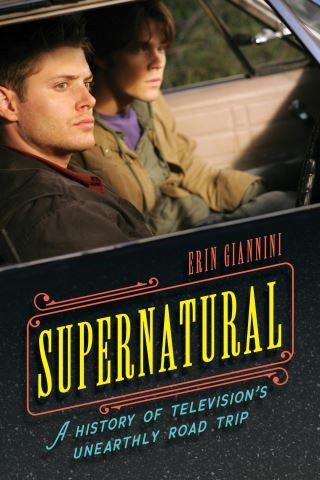 A captivating exploration of the television phenomenon that is Supernatural, with insights into characters, plots, and the show’s impact on pop culture.

When Supernatural first aired on the CW in 2005, it was dismissed by many for being “pretty guys fighting demons.” Yet Supernatural persisted for 15 seasons to become the anchor of the network’s line-up and the longest running genre series in US television history.

In Supernatural: A History of Television's Unearthly Road Trip, Erin Giannini delves into the phenomenon of this cult series and its devoted fan base. Covering all 15 seasons, including the series finale that aired in 2020, this book examines the show’s predecessors, characters, major storylines, and fan activism. It also revisits creator Eric Kripke’s road to creating the series, draws surprising and revealing connections between the show and other series, and discusses the ways Supernatural responded to social and industry changes throughout its long run.

Supernatural was the little show that could for 15 years, persisting beyond its original network’s lifespan and surviving the departure of its creator and showrunner, in no small part due to its loyal fans. Inspired by shows such as Buffy the Vampire Slayer and going on to influence many shows that followed, Supernatural offers insight into how a series can adapt and grow to become a mainstay of primetime television.

Erin Giannini has served as an editor and contributor at PopMatters and has published and presented work on television series such as Supernatural, Dollhouse, iZombie, and Angel. She is the author of Joss Whedon Versus the Corporation: Big Business Critiqued in the Films and Television Programs. She lives in Albuquerque, New Mexico.