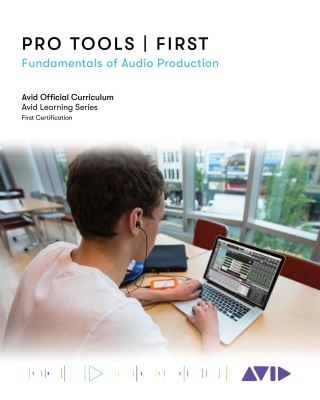 Pro Tools | First: Fundamentals of Audio Production introduces users to the power of Pro Tools software and marks the first steps toward developing core skills in audio production. The book covers the basic principles you’ll need to complete a Pro Tools | First project, from initial setup to final output, and it is designed for those who are new to professional audio production and also for experienced users who are unfamiliar with Pro Tools software.

This book is laid-out to mirror the creative process of audio production—from set up, to the recording process, editing and mixing, and then creating the final files. Interspersed within each chapter are short hands-on tutorial exercises which give users a chance to explore the concepts and techniques being discussed and hear the results.

For those interested in gaining official Avid certification, this book is also a valuable introduction for further learning and through the Avid Learning Series curriculum.

Andrew Hagerman has been a professional musician and teacher for the majority of his 50+ years. Beginning his musical life at the early age of eight as an aspiring tubist, Andy continued his studies at the prestigious Northwestern University in Chicago, Illinois. During his time there, MIDI and computer music were in their infancy, and Andy recognized the usefulness of these new technologies in aiding the creative process. He had a unique opportunity to learn these tools as they were being created and refined, and his quest for the best in audio and music technology ultimately led him to use and teach Avid’s Pro Tools.