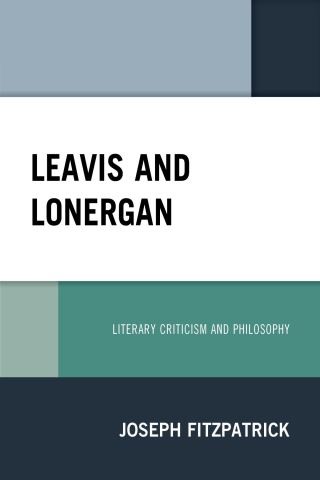 This book illustrates the value of the cross-fertilisation of literary criticism with philosophy, something Leavis advocated in his later writings. Lonergan’s epistemology of Critical Realism supports Leavis’s account of how we reach a valid judgment concerning the worth of a poem or literary text and his exploration of the relationship between subjectivity and objectivity illustrates how close engagement with serious literature can be considered morally beneficial, something Leavis passionately believed in. Leavis and Lonergan are at one in providing convincing arguments against Cartesian dualism and the dominant positivist philosophies of their times. And Leavis’s method and practice as a literary critic, which he developed independently of Lonergan, exemplify Lonergan’s epistemology as applied to literature and, in this way, illustrate its versatility and fruitfulness.

Joseph Fitzpatrick: Joseph Fitzpatrick has worked as a teacher of English, a lecturer in higher education specializing in English literature , and as an English specialist member of Her Majesty’s Inspectorate of Schools. He has published extensively on the subject of philosophy and literature.