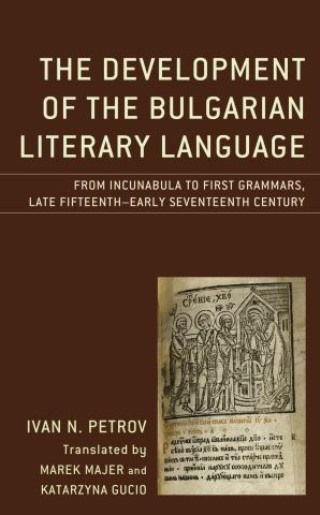 The Development of the Bulgarian Literary Language

Ivan N. Petrov’s The Development of the Bulgarian Literary Language: From Incunabula to First Grammars, Late Fifteenth–Early Seventeenth Century examines the history of the first printed Cyrillic books and their role in the development of the Bulgarian literary language. In the literary culture of the Southern Slavs, especially the Bulgarians, the period that began at the end of the fifteenth century and covered the sixteenth and seventeenth centuries is often seen as a foreshadowing of the pre-national era of modern times. In particular, the centuries-old manuscript tradition was gradually replaced by the Cyrillic printed book, which—after the incunabula of Krakow and Montenegro—was published in such centers as Târgoviște, Prague, Venice, Serbian monasteries, Vilnius, Moscow, Zabłudów, Lviv, Ostroh, and many others. Petrov shows how the study of old Slavic prints is closely linked to the processes that determined the emergence of modern literary languages in the Slavia Orthodoxa area, including the influence of the liturgical Church Slavonic language shared by the Orthodox Slavs, which was increasingly standardized and codified at that time. The perspective of a language historian brings new light to the complex and multidimensional issues of this important transitional period of Slavic history and culture.

Ivan N. Petrov is associate professor of Slavic Philology at the University of Lodz.