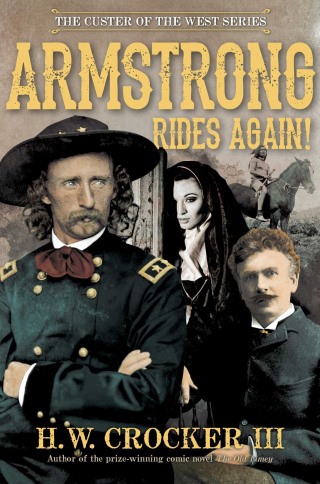 In Armstrong, the first volume in the Custer of the West series, George Armstrong Custer survived the battle at the Little Big Horn, assumed a new identity (Marshal Armstrong Armstrong) and with the help of a multilingual Indian scout, cancan dancers, Chinese acrobats, a savage dog, and a Southern cardsharp, saved the town of Bloody Gulch, Montana, from the oppression of a corrupt Indian trader.

Now Armstrong is back, in Armstrong Rides Again! making common cause with the writer (and former Union officer) Ambrose Bierce, and serving as a soldier of fortune in the strife-torn Latin American island of Neustraguano, where romance, intrigue, a rumbling volcano, revolutionaries, smugglers, treasure, and a civil war all combine for a rip-roaring sequel.

H. W. Crocker: H. W. Crocker III is the bestselling author of the prize-winning comic novel The Old Limey and several nonfiction histories, including Don't Tread on Me, Robert E. Lee on Leadership, Triumph, The Yanks Are Coming, The Politically Incorrect Guide to the Civil War, and The Politically Incorrect Guide to the British Empire. His journalism has appeared in National Review, the American Spectator, the Washington Times, and many other outlets. Born and raised in San Diego, CA, Crocker currently lives on the site of a former Confederate encampment in Virginia.