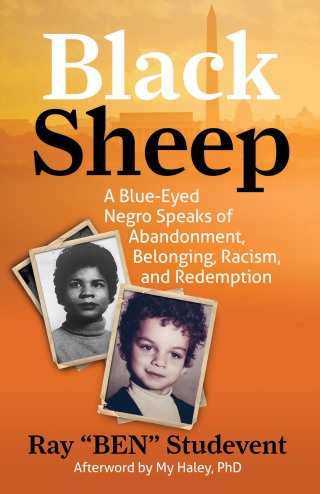 A Blue-Eyed Negro Speaks of Abandonment, Belonging, Racism, and Redemption

A captivating memoir of a biracial boy growing up in Washington, D.C., abandoned by his birth parents, and lovingly raised by a woman with deep emotional scars from her upbringing in the segregated South.

The unforgettable memoir Black Sheep opens with a middle-aged Ray Studevent returning to Washington, D.C., to his “momma,” Lemell Studevent. She didn’t give birth to him, but she is the woman who raised him. She is the woman who stood by him through thick and thin. She is the woman who saved his life. But now in her late 80s, Lemell is lost to her Alzheimer’s disease. On most days, she has no idea who she is, no recollection of the remarkable life she has lived. Every once in a while, she remembers small fragments of people, places, and things but she doesn’t know how all of these pieces fit together. At night, she is often haunted by nightmares of growing up in the segregated South, of evil men with blue eyes peering through slits in their hooded robes. Frightened by Ray, this stranger, this white man with his piercing blue eyes, she threatens to shoot him. Trying not to get swept up in his own buried, decades-old feelings of abandonment, Ray knows he must work to regain her trust as he thinks back to how far they both have come.

Ray Studevent grew up between two worlds. Born to a white, heroin-addicted mother and a black, violent, alcoholic father, the odds were stacked against him from day one. When his parents abandoned him at the age of five, after living in a world no child should experience, he was saved from the foster-care system by his father’s uncle Calvin, who offered him stability and a loving home. When Calvin tragically died two years later, it was up to his widow Lemell to raise Ray. But this was no easy task. Lemell grew up in the brutality of segregated Mississippi, emotionally scarred and justifiably resenting white people. Now, she must confront these demons as she raises a mixed-race child—white on the outside, black on the inside—on the eastern side of the Anacostia River, the blackest part of the blackest city in America. This is a time of heightened racial tension, not long after the assassination of Dr. Martin Luther King Jr. and the D.C. race riots. There are guidelines if you are black, different rules if you are white, but only mixed messages for mixed-race children who must fight for acceptance as they struggle to find their identity.

As Dr. My Haley, the widow of Roots author Alex Haley, wrote in the Foreword for Black Sheep, “Ray’s pathway to manhood came not through the people who taught him what to do, but through the woman who taught him how to be, even as she learned for herself how to be.” At a time when we are all reexamining the complex issues of race, identity, disenfranchisement, and belonging, this compelling true story shows us what is possible when we trust our hearts and follow the path of love.

Ray "BEN" Studevent: Born in the mid 1960s in America's blackest city, Washington D.C., to a white, heroin-addicted mother and a black alcoholic father, Ray Studevent had no idea his unique look would take him on a two-sided journey throughout his entire life. After being abandoned by both parents at the age of five, he was adopted by his aunt Lemell Studevent, a beautiful, black Southern belle who hailed from the depths of the Southern hell that was segregated Jackson, Mississippi. While trying to fit into an all-black neighborhood looking like the all-American white boy next door, physically he was the epitome of everything Lemell despised about her childhood in 1930s and 40s Mississippi. Ray had to fight for Lemell's love, fight to survive the mean streets of D.C., and most of all fight the racial identity crisis that continually haunted him. This identity struggle set the stage that would prepare him to always look around the room and decide whether it was better to be black or white. His winding personal and career journey ebbed and flowed, taking him to prison, comedy clubs, fatherhood, modeling, and stock market researcher. In all these varied experiences, he realized that race played a critical role.