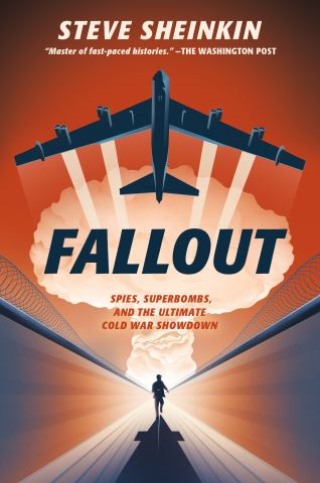 New York Times bestselling author Steve Sheinkin presents a follow up to his award-winning book Bomb: The Race to Build--and Steal--the World's Most Dangerous Weapon, taking readers on a terrifying journey into the Cold War and our mutual assured destruction.

As World War II comes to a close, the United States and the Soviet Union emerge as the two greatest world powers on extreme opposites of the political spectrum. After the United States showed its hand with the atomic bomb in Hiroshima, the Soviets refuse to be left behind. With communism sweeping the globe, the two nations begin a neck-and-neck competition to build even more destructive bombs and conquer the Space Race. In their battle for dominance, spy planes fly above, armed submarines swim deep below, and undercover agents meet in the dead of night.

The Cold War game grows more precarious as weapons are pointed towards each other, with fingers literally on the trigger. The decades-long showdown culminates in the Cuban Missile Crisis, the world's close call with the third—and final—world war.

“This is edge-of-the seat material that will resonate with YAs who clamor for true spy stories, and it will undoubtedly engross a cross-market audience of adults who dozed through the World War II unit in high school.” —BCCB, starred review

“...reads like an international spy thriller, and that's the beauty of it.” —School Library Journal, starred review

“[A] complicated thriller that intercuts action with the deftness of a Hollywood blockbuster.” —Booklist, , starred review

“A superb tale of an era and an effort that forever changed our world.” —Kirkus

Steve Sheinkin: Steve Sheinkin is the acclaimed author of fast-paced, cinematic nonfiction histories, including Fallout, Undefeated, Born to Fly, The Port Chicago 50, and Bomb. His accolades include a Newbery Honor, three Boston Globe–Horn Book Awards, a Sibert Medal and Honor, and three National Book Award finalist honors. He lives in Saratoga Springs, New York, with his wife and two children.