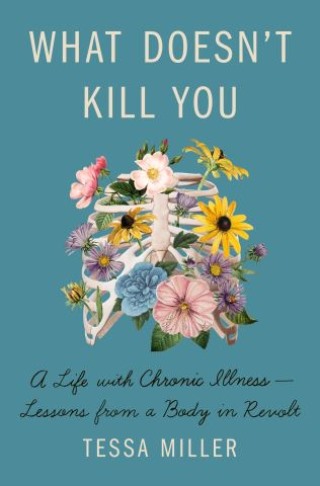 What Doesn't Kill You

A Life with Chronic Illness - Lessons from a Body in Revolt

"Should be read by anyone with a body. . . . Relentlessly researched and undeniably smart."
—The New York Times

What Doesn't Kill You is the riveting account of a young journalist’s awakening to chronic illness, weaving together personal story and reporting to shed light on living with an ailment forever.

Tessa Miller was an ambitious twentysomething writer in New York City when, on a random fall day, her stomach began to seize up. At first, she toughed it out through searing pain, taking sick days from work, unable to leave the bathroom or her bed. But when it became undeniable that something was seriously wrong, Miller gave in to family pressure and went to the hospital—beginning a years-long nightmare of procedures, misdiagnoses, and life-threatening infections. Once she was finally correctly diagnosed with Crohn’s disease, Miller faced another battle: accepting that she will never get better.

Today, an astonishing three in five adults in the United States suffer from a chronic disease—a percentage expected to rise post-Covid. Whether the illness is arthritis, asthma, Crohn's, diabetes, endometriosis, multiple sclerosis, ulcerative colitis, or any other incurable illness, and whether the sufferer is a colleague, a loved one, or you, these diseases have an impact on just about every one of us. Yet there remains an air of shame and isolation about the topic of chronic sickness. Millions must endure these disorders not only physically but also emotionally, balancing the stress of relationships and work amid the ever-present threat of health complications.

Miller segues seamlessly from her dramatic personal experiences into a frank look at the cultural realities (medical, occupational, social) inherent in receiving a lifetime diagnosis. She offers hard-earned wisdom, solidarity, and an ultimately surprising promise of joy for those trying to make sense of it all.

Tessa Miller: Tessa Miller is a Brooklyn-based health and science journalist. Her writing has appeared in the New York Times, New York magazine, Self, Vice, and Medium, among others. She was a senior editor at Lifehacker and the Daily Beast. What Doesn’t Kill You is her first book.