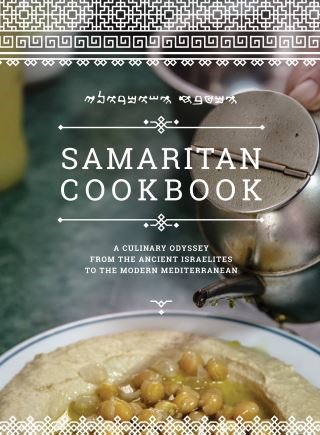 A Culinary Odyssey from the Ancient Israelites to the Modern Mediterranean

The first-ever Samaritan Cookbook takes you on an adventure into this little-known world of Israelite food and drink. We journey to both halves of the community: in Holon, outside Tel Aviv, and Kiryat Luza, on Mount Gerizim near Nablus. Most people have heard the Parable of the Good Samaritan, but few realize that the community is once again going strong today, much less tasted or prepared any of their cuisine. Despite almost fading from the history books, the Samaritan way of life has survived 3,000 years in the Holy Land. From hummus and avocado sesame salad to lamb meatballs with pine nuts and chicken with za'atar, Samaritan cuisine is a unique blend of Mediterranean traditions, reflecting the flavors and spices of contemporary Arabic and ancient Levantine neighbors.

Benyamim Tsedaka: Benyamim Tsedaka is an elder of his people and head of the Israelite Samaritan Information Center. He has published more than 120 books and over 2,000 articles on Samaritan life.

He was born in 1944 in Nablus, and since 1966, he has hosted tourists and educational groups visiting Samaritan sites in Holon and Mt. Gerizim. He completed studies in the History of the People of Israel, and Bible Studies, at the Hebrew University of Jerusalem. Since 1969, he has been chief editor of newspaper A.B The Samaritan News.

Beginning in 1980, he served as choir director for the Israelite Samaritan Music Ensemble and chairman of the Samaritan basketball team.

Editor Ben Piven has spent over a decade as a journalist for Al Jazeera and other outlets. With extensive experience in the languages and societies of the Middle East, the Baltimore native was a Fulbright Scholar in cultural geography. He studied digital media at Columbia University School of Journalism.

Editor Avishay Zelmanovich is a scholar of Middle Eastern cultures and Jewish history. Being fluent in Hebrew and English helped him translate the complexities of the original cookbook. Born in Kibbutz Na'an but raised in New York, he has bridged the American and Israeli cultural landscapes.

In 2007, the Samaritan Cookbook editors met Benyamim "Benny" Tsedaka at his home in Holon and then attended the Passover celebration for the Samaritan community in Kiryat Luza atop Mt. Gerizim.

For Piven, interest in Samaritan history turned from an initial newspaper assignment to a long-term passion when he and Avishay began to rendezvous with Benny during the Samaritan lecturer's annual U.S. trips.