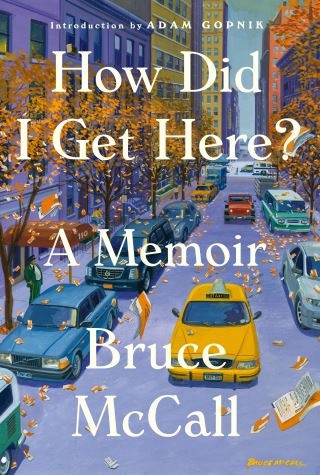 How Did I Get Here?

From his hardscrabble post-World War II Ontario childhood and coming of age to Mad Men-era New York City and the creative pinnacle of advertising, to the hallowed halls of Saturday Night Live and The New Yorker, Bruce McCall’s personal and creative journey is stunningly honest, bittersweet, and, above all, inspiring.

Beloved for his strikingly original and wickedly perceptive New Yorker covers, as well as his many Shouts and Murmurs, Bruce is a rare double threat as an artist and writer. Self-taught in both disciplines, his artistic world has captured the imagination of a loyal fan base that includes no less than David Letterman (whom he coauthored a book with) and other satire aficionados. Pulling no punches, How Did I Get Here? chronicles the evolution of his artistic genius as well as his journey from gifted childhood scribbler to passionate automobile enthusiast, a hobby that took him to the heights of the Detroit and Manhattan advertising worlds. His long-held passion for drawing and writing, which mostly lay dormant during his Mad Men days, reemerged later in life as he left the realm of advertising for the world of arts and letters, most notably at the National Lampoon, as a writer for Saturday Night Live in its first incarnation, and then of course at The New Yorker, as well as other Conde Nast magazines, such as Vanity Fair. His is an unorthodox life and career path, traversing through worlds that have now become iconic, giving us rich first-hand insight into Bruce's unique creative development and process, and providing a rare window into both the highs and the lows that define an artist's career and life.

With wit, candor, and cover illustrations showcasing Bruce's storied career, Bruce McCall’s memoir will charm his many fans and anyone who knows and loves the places and eras he describes so well.

Bruce McCall: Bruce McCall began his career in a commercial art studio, switched to journalism and then advertising, and began writing and painting humorous subjects in the seventies, first with National Lampoon and ultimately for The New Yorker. McCall has published six previous books, including This Land Was Made for You and Me (But Mostly Me) in collaboration with David Letterman. He lives in New York City.