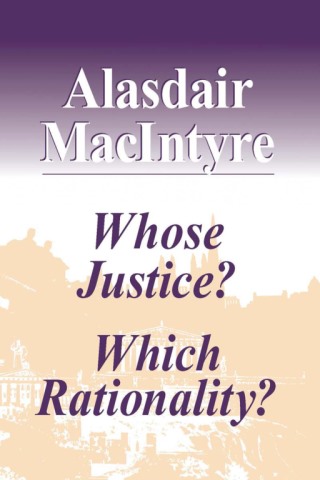 Whose Justice? Which Rationality?

Whose Justice? Which Rationality?, the sequel to After Virtue, is a persuasive argument of there not being rationality that is not the rationality of some tradition. MacIntyre examines the problems presented by the existence of rival traditions of inquiry in the cases of four major philosophers: Aristotle, Augustine, Aquinas, and Hume.

Alasdair MacIntyre is research professor of philosophy at the University of Notre Dame. He is the author of numerous books, including After Virtue: A Study in Moral Theory, Third Edition, A Short History of Ethics, and Three Rival Versions of Moral Enquiry: Encyclopaedia, Genealogy, and Tradition, all published by the University of Notre Dame Press.