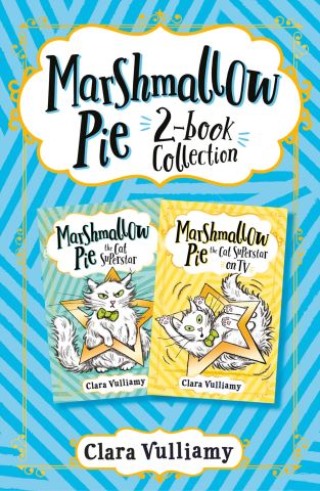 Books 1 and 2 in the hilarious new series from Clara Vulliamy, the author-illustrator of Dotty Detective, about grumpy cat Marshmallow Pie and his reluctant pursuit of stardom. Perfect for fans of Toto the Ninja Cat or The Secret Life of Pets.

His new owner, Amelia Lime, has grand plans to turn Pie into a STAR… But Pie thinks he’s a star already, to be honest!

Marshmallow Pie the Cat Superstar on TV
With the help of his owner, Amelia, Pie is well on his way to stardom. He’s got himself a role ON TV! But then he hears that he’ll be joined in the spotlight – by Gingernut, the cheeky kitten… Can Pie learn how to share, or will his biggest opportunity yet come tumbling down?

Two hilarious tales told in the voice of Marshmallow Pie himself, his mischievous antics are charmingly illustrated throughout.

Clara Vulliamy was born in London and studied at Chelsea School of Art, The Ruskin and the Royal Academy. She is the daughter of the celebrated author-illustrator Shirley Hughes and began illustrating picture books when she had her own children. She has since written and illustrated many stories, sometimes collaborating with her mother. She lives in Twickenham, with her husband and their daughters, Leah and Martha.