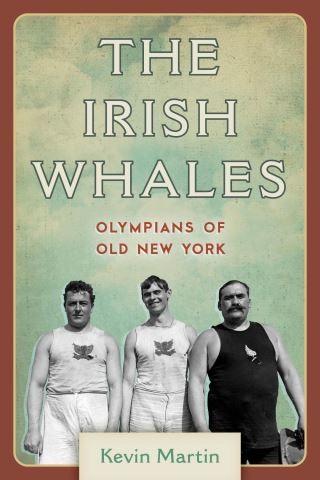 In the early 1900s, the Olympic Games track and field throwing events were dominated by a group of Irish-born weight throwers representing the United States. Of immense size and with a larger-than-life presence, these athletes came to be known as the “Irish Whales.”

In The Irish Whales: Olympians of Old New York, Kevin Martin shares the untold story of these Irish American athletes who competed with unparalleled distinction for the United States. James Mitchell, John Flanagan, Martin Sheridan, Pat McDonald, Paddy Ryan, and Con Walsh won a total of eighteen medals in the Olympic Games between 1900 and 1924 and completely dominated the world stage in their chosen athletic disciplines. They were lionized in the American and Irish press and became folk heroes among Irish-American immigrant communities. Almost all of these men were further distinguished by their membership in the fabled Irish American Athletic Club of New York and careers with the New York Police Department.

The story of the Irish Whales is the very embodiment of the American Dream and exemplifies the triumph of many Irish emigrants in the New World. Featuring a wonderful collection of original photographs, The Irish Whales tells the dramatic stories of these international athletes and their extraordinary sporting successes.

Kevin Martin: Kevin Martin holds a master’s degree in communications and cultural studies from Ireland’s Dublin City University. He has taught communications, Irish social and cultural history, and cultural studies at high school and university levels. Martin’s three published works in Ireland include Have Ye No Homes To Go To?: The History of the Irish Pub (2016), A Happy Type of Sadness: A Journey Through Irish Country Music (2018), and The Complete Guide to Irish Pubs (2018).