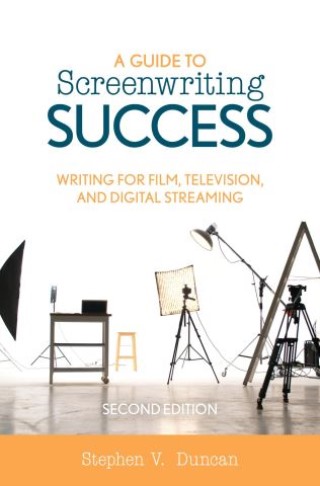 A Guide to Screenwriting Success

A Guide to Screenwriting Success, Second Edition provides a comprehensive overview of writing—and rewriting—a screenplay or teleplay and writing for digital content. Duncan's handy book teaches new screenwriters the process of creating a professional screenplay from beginning to end. It shows that inspiration, creativity, and good writing are not elusive concepts but attainable goals that any motivated person can aspire to. Duncan includes sections on all aspects of screenwriting—from character development to story templates—and breaks down the three acts of a screenplay into manageable pieces. A Guide to Screenwriting Success contains dozens of exercises to help writers through these steps. The second half of Duncan's practical book covers another, often overlooked, side of screenwriting—the teleplay. Aspiring writers who also want to try their hand at writing for television will need to learn the specifics of the field. The book breaks down this area into two parts, the one-hour teleplay and the situation comedy. There is a section on writing and producing digital content that embraces the “Do It Yourself” attitude to approaching a career in the entertainment industry. Success in screenwriting is no longer a dream but an achievable goal for those who pick up Duncan's guide.

Stephen V. Duncan: Stephen V. Duncan is a tenured professor of screenwriting at the Loyola Marymount University’s School of Film and Television in Los Angeles, Calif. He has served as chair of the screenwriting department and interim dean. His produced credits include co-creator and executive consultant of the critically acclaimed, award-winning, Emmy nominated CBS-TV one-hour Vietnam War series Tour of Duty, writer-producer of the Emmy nominated ABC-TV one-hour action series A Man Called Hawk, and the co-writer of the Emmy nominated Turner Network Television original movie The Court-Martial of Jackie Robinson.